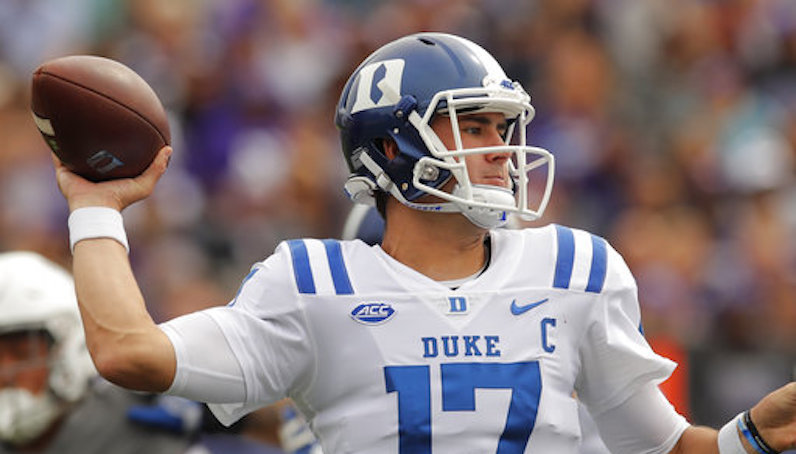 Duke's Daniel Jones makes a pass against Northwestern during the first half of an NCAA college football game Saturday, Sept. 8, 2018, in Evanston, Ill. (AP Photo/Jim Young)

The 2018 football season was off to a great start for Duke. After a nice road win over Northwestern, 21-7, the Blue Devils improved to 2-0 — with a road date against Baylor next weekend. Against the Wildcats, Duke played the kind of ball you expected to see from them this year: efficient play from Daniel Jones and a dominant, at times, defense.

The victory, however, was soured — greatly — by news that came out on Sunday.

Star cornerback Mark Gilbert and quarterback Daniel Jones both underwent surgery on Sunday. Gilbert’s procedure dealt with a hip injury; he will miss the rest of the season. Jones, on the other hand, addressed a fractured left clavicle; he is out indefinitely.

Gilbert is coming off a monster 2017 season, and is one of the best cornerbacks in the nation. A season ago, Gilbert had six interceptions (tied for fourth most in the FBS) and defended 20 passes, which was No. 1 in the ACC. Later in the day on Sunday, Gilbert took to Twitter:

Thank you for all your support ! 🙏🏾 My faith is stronger now than it has ever been. Sometimes God does things you don't understand, but all you can do is trust His plan. By no means does this minor set back mean that the 🌴sland is closed, but simply under construction! ✌🏾🌴

Duke will now need more from reserve cornerback Michael Carter II — a former 3-star recruit who intercepted his first career pass in Evanston. Gilbert was a candidate to leave early for the 2019 NFL Draft, but perhaps this sways him to return to Duke for another season.

On the other side of the ball, though: Jones had been excellent so far this season. The redshirt junior has completed 74.4 percent of his passes (29-of-39) and averaged 10 yards per pass attempt.

Jones is one of six FBS quarterbacks with four touchdown passes, one rushing touchdown and a completion rate over 70 percent. That’s convenient filter usage (on my part), but Jones is joined on that list by other stars: Tua Tagovailoa and Drew Lock.

David Cutcliffe has a few options to go to in an effort to replace Jones; however, the top of that list starts with Quentin Harris, another former 3-star recruit. A redshirt junior, Harris is just 9-of-15 (60 percent) passing the ball for his career. He’s also run for 104 yards on 39 carries (2.7 yards a pop), and two touchdowns — both of which came in the 2017 season.

Cutcliffe: “We’re not going to change the world but one interaction at a time”