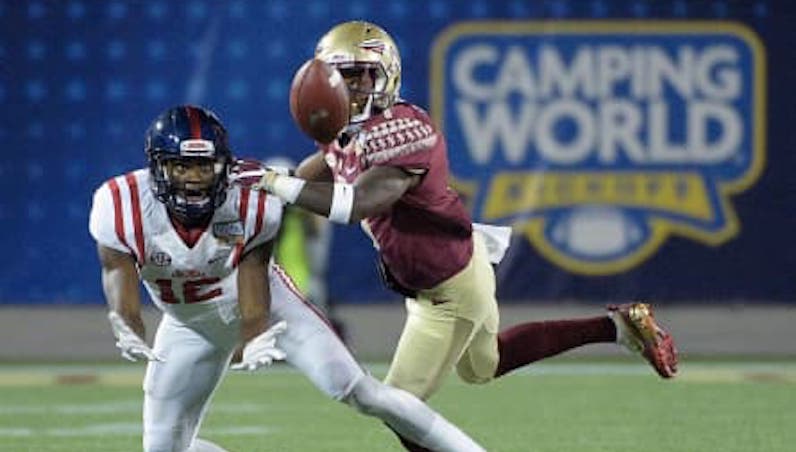 Hey, it’s still the offseason — sort of, at least, with ACC football teams returning to the practice field for fall camps this week. With that in mind, how about another inane list: the top five cornerbacks in the ACC? Yeah!

Clemson’s front four draws most of the headlines, but there’s talent all over this defense, including the secondary. The 6-foot-2 Mullen brings size and length to the corner position; he puts it to good use, too.

Mullen, who recorded 30 solo tackles, intercepted three passes and broke up three more passes. With Ryan Carter gone, Mullen will have to take on an even bigger role at Clemson this season. According to Football Study Hall, Clemson’s defensive backs ranked 45th nationally with a Havoc Rate of 7.1 percent.

During the 2017 season, Bassey emerged as one of the premier breakout defensive players in the ACC. As a sophomore, Bassey record 75 total tackles and three interceptions (10th most in the conference). He was one of only five ACC players to hit those benchmarks last season, and the only non-safety on that list, too.

Bassey, who recorded six tackles for loss, broke up 16 passes, which was tops in the ACC and tied for sixth most in the FBS.

Along with other defensive back standout Cameron Glenn and Jessie Bates, Bassey was part of a position group that ranked 34th nationally in Havoc Rate (7.3 percent), according to Football Study Hall. Bassey and Glenn return to lead the defensive backfield for Dave Clawson and the Demon Deacons.

In a sport that can often feel stodgy, Miami’s Turnover Chain was a breath of fresh air in 2017. As Miami won 10 games for the first time since 2003 (wow), the Hurricanes were paced by an opportunistic defense: Miami tied for fifth in the FBS in turnover margin. Defensively, the Canes ranked 37th nationally in efficiency and 13th in isolated points per play (1.04), per Football Study Hall.

A key player in that development: cornerback Michael Jackson.

As a full-time starter in 2017 (10 starts), Jackson recorded 43 total tackles, including one run stuff per Football Study Hall, and intercepted four passes — third most in the ACC. Jackson broke up another five passes, too.

Two Duke players were named to the ACC’s preseason all-conference roster: linebacker Joe Giles-Harris and Mark Gilbert. The Blue Devils have the chance to be exceptional on defense; it may start with the linebackers, but this secondary could be special, too.

Only three FBS players recorded more interceptions than Gilbert last season — who finished with six. In total, Gilbert defended 20 total passes, which was No. 1 in the ACC.

Gilbert can play the run, too, though. According to Football Study Hall, three of Gilbert’s 35 tackles were run stuffs — tackles at or behind the line of scrimmage. Duke’s defensive backs ranked sixth in the FBS in 2017 in Havoc Rate (9.3 percent).

In 2017, as a sophomore, Levonta Taylor — the former 5-star recruit — recorded two interceptions and broke up three passes. That’s pretty good, but the threat he poses is far more impressive. Opponents didn’t even want to test Taylor.

According to Pro Football Focus, Taylor was targeted just once every 11.4 snaps that Florida State’s defense faced last season. This ranks second highest amongst draft-eligible defensive backs for the 2019 NFL Draft. When he was targeted, though, Taylor allowed a passer rating of just 28.5. That’s outstanding.

This dude is a pure shutdown corner; Taylor allow just one reception per 30.6 snaps in coverage, per Pro Football Focus, which is the best amongst draft-eligible cornerbacks.

The Top 5 Defensive Ends in the ACC