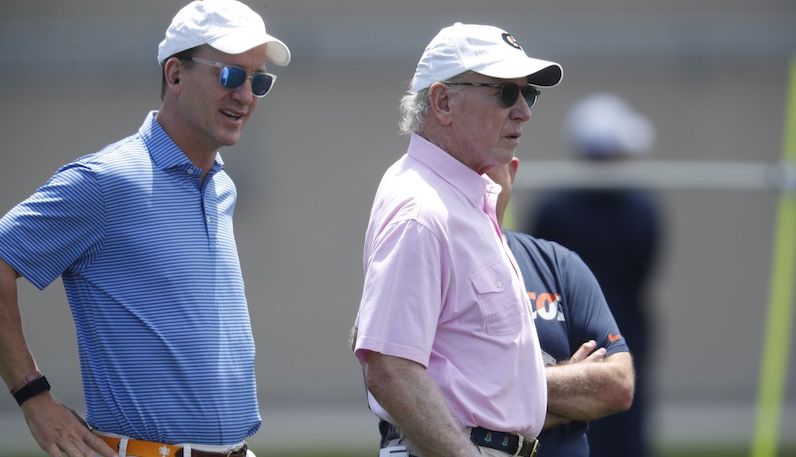 Archie Manning, right, believes his grandson Arch is ahead of where his sons Peyton, left, and Eli were in the same stage of their careers. Arch is a starting varsity quarterback as a freshman in Louisiana (AP Photo)

A product of New Orleans, where he stars for Isidore Newman, the 6-foot-3, 195-pound Manning is ranked as a top five overall prospect for 2023, according to 247 Sports. Manning already has offers from Alabama, LSU and Georgia. Mack Brown and North Carolina have also offered.

Prior to coming to Duke, David Cutcliffe was a longtime assistant at Tennessee (1983-98); during a big chunk of that time, he coached quarterbacks and coordinated the Vols on offense. Cutcliffe and Peyton Manning teamed up for major success in Knoxville. Payton Manning was the No. 1 pick in the 1998 NFL Draft.

A few years later, when Cutcliffe was the head coach at Ole Miss, he helped groom Eli Manning into the No. 1 pick in the 2004 NFL Draft. (Ironically, the quarterback that replaced Manning with the New York Giants, Daniel Jones, played for Cutcliffe at Duke, too.)

Peyton and Eli both remained close with Cutcliffe; they were known to show up in Durham during the offseason for workouts with the man that helped program the quarterback brains.