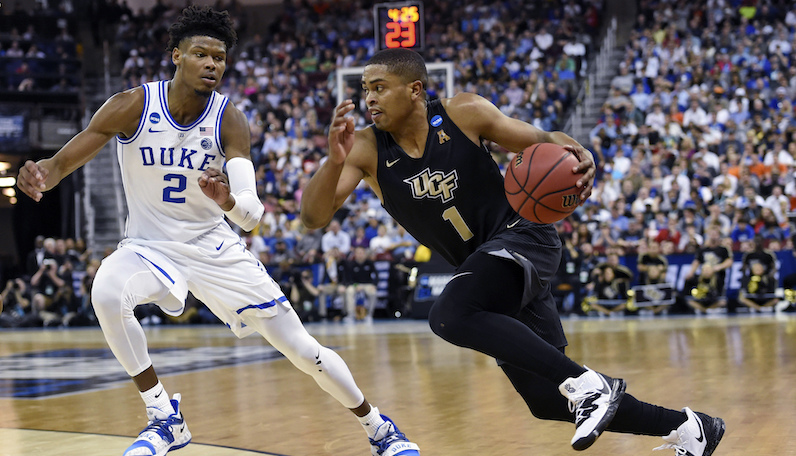 Central Florida's BJ Taylor (1) drives down the baseline while defended by Duke's Cam Reddish (2) during the first half of a first round men’s college basketball game in the NCAA Tournament in Columbia, S.C. Sunday, March 24, 2019. (AP Photo/Richard Shiro)

There seems to be a little clarity provided on the status of Duke swingman Cam Reddish. Moments before the team’s Sweet 16 showdown with ACC foe Virginia Tech, Reddish pulled himself out of the lineup. Sophomore wing Alex O’Connell started in his place.

Duke coach Mike Krzyzewski spoke with the media Saturday afternoon in Washington D.C. According to Coach K, Reddish will be a game-time decision for Duke’s Sunday evening matchup with Michigan State. A trip to the Final Four is on the line. Reddish, of course, is one of the top draft prospects in the country.

Reddish spoke with the media, too. He mentioned that he experienced issues with his knee earlier this week — back on Thursday.

Reddish said he tweaked his knee Thursday. Going through treatment and feels better today but wouldn’t put a percentage on where he is health-wise. https://t.co/b0SU2o2ECb

And not to be outdone, but Pete Thamel of Yahoo! Sports also spoke with Reddish. According to a tweet from Thamel, Reddish said he’s experienced issues with that left knee since the team’s first game against North Carolina — the infamous Zion Williamson shoe game, back on Feb. 20.

Just spoke to Cam Reddish in Duke locker room. He said he’s had issues with his left knee since first UNC game. He said he’d call it tendinitis but lacked a definite diagnosis. He said he’s done an unbelievable amount of treatment since last night. He has no idea if he’ll play.

For the season, Reddish has played in 35 of 37 games; he also sat out the home loss to Syracuse, which will be remembered for the shoulder injury suffered by fellow freshman Tre Jones.

While Reddish has struggled to finish at the rim this season (51.2 FG%), and seen his 3-point shot come and go (33.3 3P%), he’s obviously a critical member of this team. The 6-foot-9 Reddish — a 3-and-D prospect on the next level — offers some range shooting and defensive versatility (2.2 steal per 40 minutes).

Cool stat from @bgeis_bird that I shared on the pod last night:

Cam Reddish is shooting 39% from outside when Duke is in a two possession game. He's shooting 29% in all other situations.

In the thrilling win over Central Florida, Reddish was solid, too: 13 points, two assists and three 3-pointers. He also drilled a pivotal 3-pointer with 1:41 left to play, which cut UCF’s four-point lead down to one.

Duke and Michigan State tip-off on Sunday at 5:05 p.m.

How Reddish found a mini midseason grove for Duke