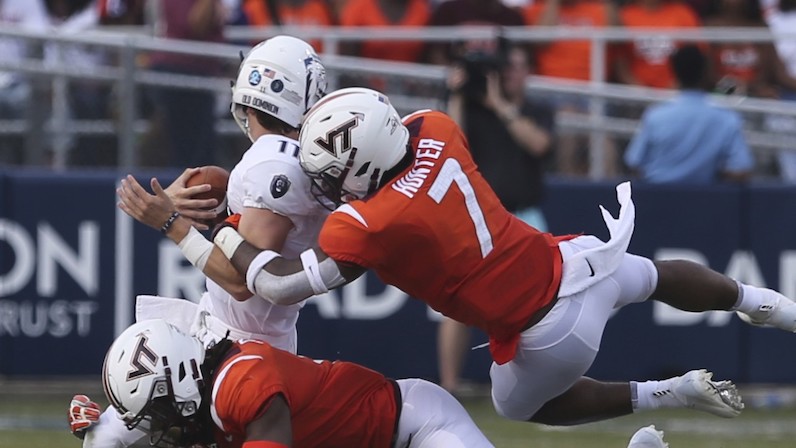 In this Sept. 22, 2018, file photo, Old Dominion's Blake LaRussa gets wrapped up by Virginia Tech's Devon Hunter (7) and Reggie Floyd (21) during the second half of an NCAA college football game, in Norfolk, Va. (AP Photo/Jason Hirschfeld, File)

In a release, Virginia Tech said Hunter failed to “uphold the high standards we have for our student athletes.” According to Norm Wood of the Daily Press, who spoke with a source in the athletic department, the suspension is completely unrelated to anything involving COVID-19.

An in-state player, Hunter was a major get in the 2017 recruiting class when the 4-star Chesapeake native committed to VT over Auburn, Florida and UNC.

During the 2019 season, Hunter started to crack Virginia Tech’s secondary rotation; the 6-foot, 220-pound safety recorded 16 tackles. Over the most recent offseason, Justin Fuente heaped praised upon Hunter, who seemed primed for a breakout season in 2020.

Fuente met with the media shortly after the release went public; the fifth-year coach expressed his surprise over the turn of events.