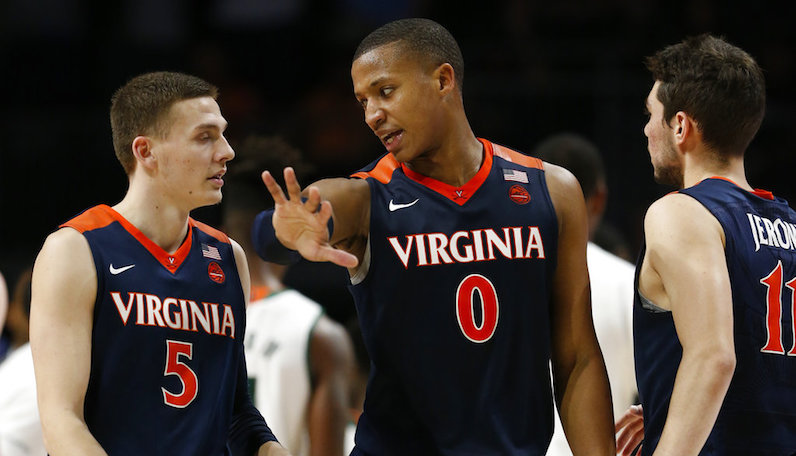 For all the talk about rising redshirt sophomore De’Andre Hunter and his NBA prospects, the next Virginia Cavalier on his way to a successful pro career might be Devon Hall.

That’s nothing new for Hall, a former redshirt himself, who, for all his production over the past two seasons often gets left out of conversations about the best players in the ACC.

But this spring, first prompted by a standout performance at the Portsmouth Invitational, Hall has improved his draft stock considerably. Now it’s looking like he is likely to get drafted this summer and could be the latest Tony Bennett guard to carve out a niche in the NBA.

Given that Hall is a probable second round pick, just like fellow Virginia product Malcolm Brogdon, we will probably hear plenty of comparisons to last season’s Rookie of the Year. That also might be a bit unfair considering Brogdon can make a solid case as the best player UVA has produced outside of three-time national player of the year Ralph Sampson.

What might be even more relevant is how favorably Hall compares to fellow former Cavaliers Joe Harris (who had a great 2017-18 season in Brooklyn) and Justin Anderson. At 6-foot-5 and about 215 pounds, Hall averaged 12 points, four rebounds and three assists as a senior. Those are size and stats that match up with Harris and Anderson coming out of Virginia.

For a player such as Hall, who was hardly on anyone’s draft boards a year ago, that’s not bad company at all. Harris has seen his career rebound nicely since being traded from Cleveland to the Brooklyn Nets. He averaged 11 points per game this year, and better than 15 a night the final month of the season, setting himself up for a nice payday on the free agent market.

Harris and Hall are also both deceptively athletic and Hall’s defensive ability, along with an ever improving three-point stroke, is going to be what NBA execs look for.

Anderson didn’t have quite the breakout season Harris did, averaging 6.2 points per game. But his 13.06 player efficiency rating (PER) is similar to Harris and he found a niche with the 76ers this season as a disruptive defender off the bench in certain situations, including in the first-round playoff series against Miami.

The point is, if Hall can do similar things at the NBA level — and there is plenty of reasons to think he can — then he’s likely to stick in the league and have a nice, long career.

Clash of Styles: Virginia adds Marshall to non-conference schedule in 2018