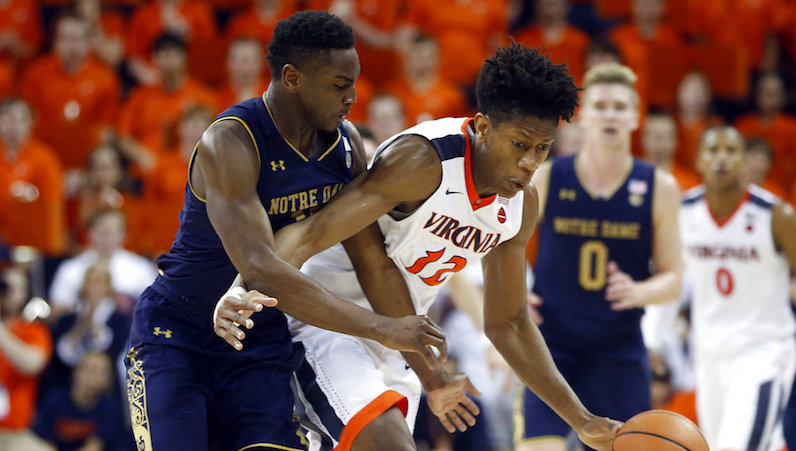 As Virginia enters a long offseason, Cavaliers fans will want to keep track of ACC Sixth Man of the Year, De’Andre Hunter.

Hunter, a redshirt freshman, missed Virginia’s first round loss to UMBC with a broken wrist and subsequently had surgery. In his absence, UVA played by far its worst game of the season and became the first No. 1 seed to lose to a 16.

Not only that, the Cavaiers’ South Region bracket subsequently opened up to the point ninth-seeded Kansas State played and lost to 11th-seeded Loyola Chicago for a spot in the Final Four.

After blowing such a tremendous shot at a deep run, Wahoos will be asking “what if” about Hunter’s injury until the end of time. But while the timing of Hunter’s unfortunate setback — which apparently happened during the Cavs’ run to the ACC Tournament title — may have played a big role in the early NCAA exit, it might have also secured at least one more season in orange and blue from Hunter. And that gives UVA an outstanding shot at making another Final Four push next year.

Next for De’Andre Hunter

Hunter, who averaged nearly 10 points per game coming off the bench, continues to move up NBA draft boards. Recently a mock draft published by Sports Illustrated listed him as a first round pick; ESPN has released similar mock drafts.

At 6-8 with a 7-2 wingspan, explosiveness off the dribble and an ability to play inside and out, Hunter is an extremely intriguing prospect to NBA front offices. And if the Philadelphia product was healthy, he’d really owe it to himself to at least explore the option of early entry.

But even after tweeting the other day that his surgery had been successful, Hunter is likely looking at 10 to 12 weeks of recovery time, and that timetable would make testing the NBA waters more difficult.

As he wouldn’t be a lock for the first round, which would mean a guaranteed contract, Hunter would ideally want to work out for NBA teams to get an idea where he might be taken. The deadline for early entry into the draft is April 22, meaning Hunter would be less than halfway through his recovery period when he’d have to decide to enter.

Anyone who does declare for early entry has until June 11 at 5 p.m. Eastern Time to withdraw and return to college. But other key events come even earlier. The NBA Draft Combine in Chicago is scheduled for May 16-20, and would be a great opportunity for a potential late first-round pick to show his stuff.

But there’s no guarantee that even without any setbacks, Hunter would be ready for the Combine by mid-May. Even skipping the Combine, but working out for individual franchises seems risky because it’s hard to imagine Hunter looking like the best version of himself immediately after sitting out for more than two months.

At this point, the ideal situation for both Hunter and Virginia appears to be a return for a redshirt sophomore season. Hunter will almost certainly enter the starting lineup and become a focal point of the Cavaliers offense along with third-team All-American Kyle Guy and starting point guard Ty Jerome.

It’s quite possible Hunter could play his way into the draft lottery in 2019 and lead the Cavaliers to another outstanding season, and producing a high first-round pick could be a boost to UVA’s recruiting and reputation.

Who will Virginia target to replace Ron Sanchez?