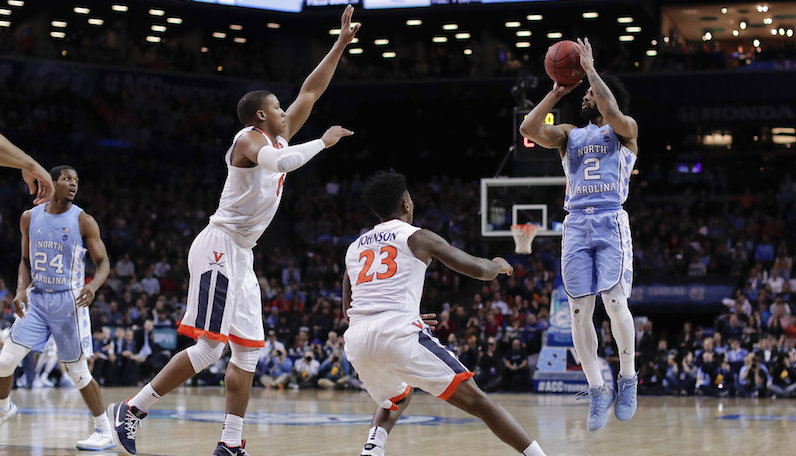 The cliche goes, “Defense Wins Championships.” Well, somethings are cliched for a reason. Once again, in the 71-63 win over North Carolina, Virginia’s defense held strong. The Cavaliers are more than the No. 1 defense in the nation, though; for the second time in Tony Bennett’s tenure at the school, Virginia basketball is the champion of the ACC.

In quarterfinal and semifinal wins over Louisville and Clemson, Virginia held its opponents to 35.7 percent shooting, and 14-of-46 (30.7 3P%) from beyond the arc. The Cardinals and Tigers both scored under one point per possession.

Against the Tar Heels, UVA was stifling, because of course. UNC, the No. 4 offense in the nation, was held to just 1.05 points per possession and 40.8 percent shooting. It’s the 32nd time this season the Cavs have held an opponent to sub-50 percent shooting.

All-ACC guard Devon Hall expanded on that after the win: “I mean, I think that speaks to our defense and how we stand to get back and build a wall. But I think we pretty much thrive on defensive stops, so that gives us energy and it gives us momentum.”

Theo Pinson, a first team ACC All-Tournament team selection, played the best basketball of his life in Brooklyn; however, even he found things tricky in the title game. Frequently matched up with the ACC’s Defensive Player of the Year, Isaiah Wilkins, Pinson shot just 1-of-10 from the field, and recorded two turnovers.

Oh, that other side of the floor, too

Virginia got surprise contributions in this game; graduate transfer Nigel Johnson, a 30 percent three-point shooter, splashed two triples in the first half. However, there’s no questioning who led this squad. Four players scored in double-digits, and it was the usual suspects: Kyle Guy (16), Devon Hall (15), Ty Jerome (12) and De’Andre Hunter (10).

UVA’s off-ball movement was crisp, and Guy had it going — flying around pindown screens, and connecting on two three-pointers, and a bevy of jumpers. Hall and Jerome combined for another five three-pointers, too.

According to STATS LLC tracking data, all three of UNC’s primary perimeter defenders — Joel Berry, Kenny Williams and Theo Pinson — each ran over a mile on the defense side of the floor.

Hunter’s stat line is interesting. The ACC’s Sixth Man of the Year scored 10 points on just three field goal attempts — thanks to an 8-of-10 performance from the free-throw line. As a team, Virginia connected on 20-of-22 (90.9 FT%) attempts from the line.

This brings us to a larger point, though. This is an outstanding team that doesn’t turn the ball over (14.5 percent turnover rate, No. 5 in the nation), hits three-pointers (44.3 FG% off screens, per Synergy Sports) and defends like mad men.

To be frank: that’s an incredible recipe. Minimize mistakes, hit three-pointers and steal souls on the defensive side of the floor.

Dating back to the 2001-02 season — starting with Maryland — all but one team finished inside the top 15 nationally in terms of adjusted defensive efficiency, per KenPom.

Virginia cut down nets in the home of the Brooklyn Nets — as orange and blue confetti covered the floor. No team is perfect, and March is a chaotic month of hoops. But if Virginia basketball wants to chop off another set of nets before 2018 is over, then this team doesn’t have to look any further than itself.

The 31 wins this season are a new program single-season high; a No. 1 seed is on the horizon. Defense pays off, and there’s nothing cliche about that.

After an injury scare, Kyle Guy returned in the best way possible for UVA