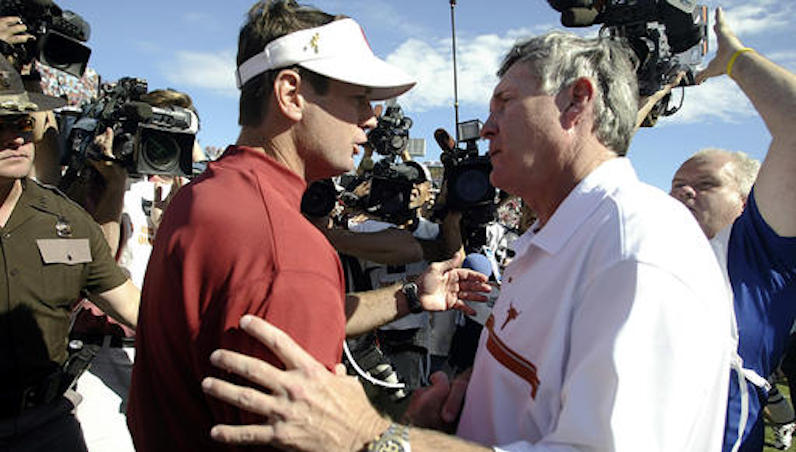 In this Oct. 8, 2005, file photo, Texas coach Mack Brown, right, greets Oklahoma coach Bob Stoops after the Longhorns 45-12 win in Dallas. The annual Texas-Oklahoma rivalry game in Dallas decided the Big 12 more often than not. Both teams were nationally ranked in nine of the ten meetings. Oklahoma won the first five from 2000-04 but Texas bounced back by winning four of the last five. (AP Photo/Matt Slocum, FIle)

North Carolina football appears to be on the precipice of hiring Mack Brown, who coached UNC for 10 years (1988-97), to replace Larry Fedora.

Mack led North Carolina to two 10-win seasons, and was named ACC Coach of the Year in 1996. During his time at Texas, Brown helped guide the Longhorns to two appearances in the national championship game, including a victory over USC in the 2005 season. Earlier this year, Brown was inducted into the College Football Hall of Fame, too.

On Monday’s David Glenn Show, a listener wrote in to ask DG: With that resume, would Mack Brown be the most accomplished coach hired by a North Carolina team/school?