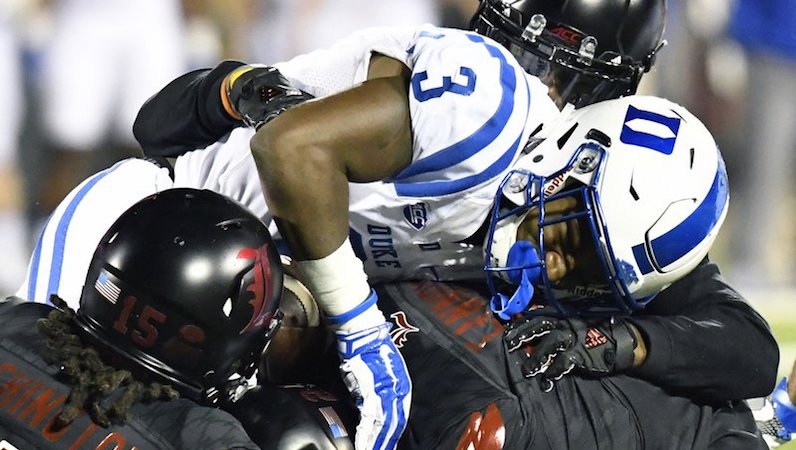 Duke enters the football season needing more production on offense to get it back to a bowl game.

The Blue Devils have a good start toward filling that need because wide receiver TJ Rahming returns.

As a sophomore last season, Rahming caught 70 passes for 742 yards. Just how much did Daniel Jones rely on Rahming during his redshirt freshman season quarterbacking the Blue Devils? Rahming had more than twice as many catches as any other Duke player last season and his yardage total nearly doubled anyone else.

Simply put, the two developed chemistry in a hurry and it should continue to boost Duke’s offense this season.

Rahming was the target on 103 passes last season, that’s 24.2 percent of all passes thrown by Duke’s quarterbacks. He turned 68 percent of them into catches.

Chris Taylor, who’ll also be counted on for production as a junior this season, was targeted on 13.1 percent of Duke’s passes last season. That’s the second-most on the team behind Rahming.

The lightning quick Rahming already has 113 catches in his Duke career. He’s not quite on pace to catch recent Blue Devils receivers Connor Vernon and Jamison Crowder, who share Duke’s career receptions record with 283. He’d have to average 85 catches per season this year and next to equal them.

But it can be argued he’s just getting started. And with Jones having already caught the attention of NFL scouts with his strong throwing arm and accuracy, he’s certainly equipped to put Rahming in position to collect that number of receptions.

One thing Duke will work on more with Rahming this season is getting him into the end zone. He only caught one touchdown pass last season.

So after going 4-8 overall with a dismal 1-7 ACC record, the Blue Devils look to score at least one more touchdown per game to boost that average back up past the 30-point per game mark.

TJ Rahming and Daniel Jones have the chemistry to make that happen.