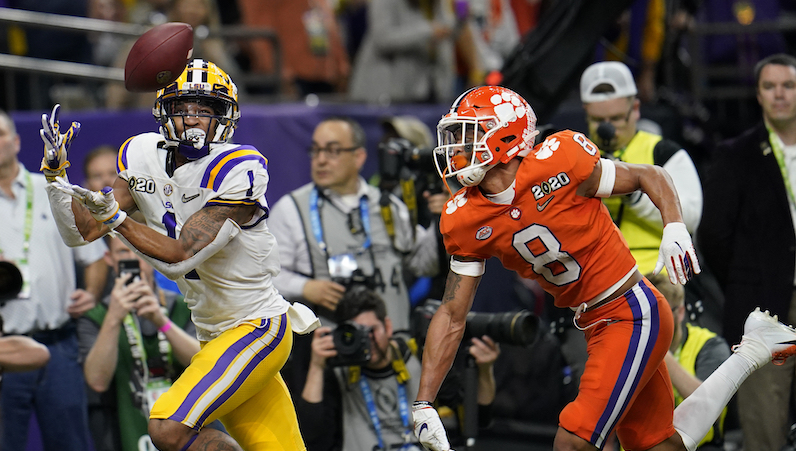 Clemson fought with passion, but in the end, Dabo Swinney’s club — a historically-dominant bunch — served as the final hurdle for LSU to clear. Joe Burrow and Ed Ogeron cleared bar with full confidence, too, as LSU dominated with a 42-25 win.

The Tigers, champions of the ACC, end the 2019 season with a 14-1 record; the loss snaps Clemson’s 29-game winning streak.

In the final game of his college career, Burrow was simply masterful; the Heisman Trophy winner threw for 463 yards, five touchdowns and zero interceptions, capping the greatest passing season in college football history. As usual, he was with worked wonders Ja’Marr Chase, the 2019 Biletnikoff Award winner: nine receptions, 221 receiving yards and two touchdowns.

Burrow also ran for 58 yards and a touchdown, which says nothing as to how good he was at extending plays with his feet, buying his receivers precious time to get open.

On the other side of the field, however, Trevor Lawrence — in his first loss since high school — struggled mightily against LSU’s defense. Lawrence completed less than 50 percent of his attempts — 18-of-37 — for 234 yards (6.3 yards per attempt), zero touchdowns and zero interceptions.

After a 36-yard touchdown run by Tee Higgins in the second quarter, Clemson took a 17-7 lead over LSU.

TEE HIGGINS ARE YOU SERIOUS!?!? pic.twitter.com/VvZEq4ZKrF

Less than two minutes after the Higgins score, though, Burrow ran one in from three yards out, which brought LSU back within one score, 17-14.

The game remained a one-possession game until late in the third quarter — when former NC State tight end Thaddeus Moss hauled in a four-yard touchdown toss from Burrow. The touchdown to Moss came one play after Clemson’s leading tackler James Skalski was ejected for targeting, two pivotal moments for LSU.

Clemson's James Skalski was ejected for targeting on this hit.#NationalChampionship pic.twitter.com/KNl5FBH9cA

In the end, Clemson fell short; this will serve as a disappointing coda to another strong season in Death Valley. However, there’s always next season.

After FSU win, Brad Brownell: “We’re a team that’s drastically different than we were from November, December”

After a highlight-filled freshman season at Duke, with plenty above-the-rim action, high-flying Cassius Stanley has…