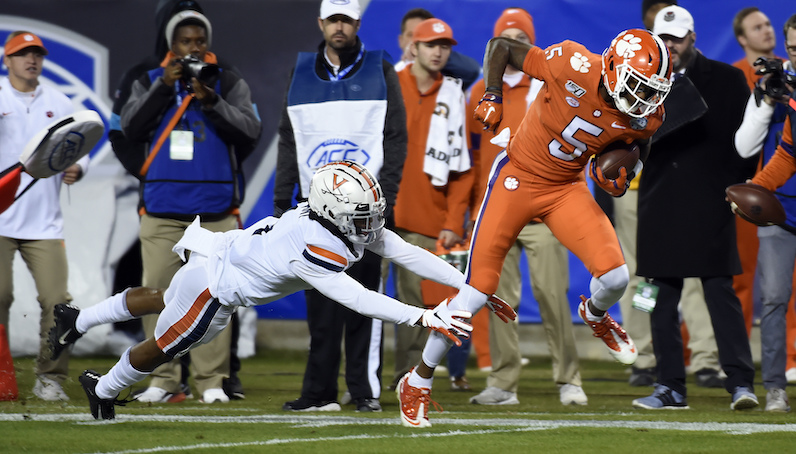 Once again, the ACC belongs to the Clemson Tigers. On Saturday night in Charlotte, Clemson dominated Virginia, winning the 2019 ACC Football Championship game 62-17 — the program’s fifth straight ACC title in as many appearances.

Clemson entered as a 29-point favorite; the Tigers dominated both sides of the ball, but let’s start with the offense. Led by their dynamic backfield — Trevor Lawrence and Travis Etienne. Clemson hung 62 points and 621 total yards on Virginia.

Etienne carried the ball 14 times for 114 yards and a touchdown, too. Lawrence completed 16-of-22 passes (72.7 percent) for 302 yards and four touchdowns, an ACC title game record.

Lawrence spread the ball around; Tee Higgins caught nine passes for 182 yards and three touchdowns, while Justyn Ross got loose for 94 receiving yards and a 59-yard touchdown reception.

The No. 1 defense in the country was up to its usual tricks, too. Virginia finished with 387 total yards and three turnovers, including two interceptions from Bryce Perkins. ACC Defensive Player of the Year Isaiah Simmons was responsible for one of those picks — his second of the season.

The All-ACC Perkins had his moments; however, those were mostly few and far between. Clemson has now won 19 ACC Football champions, the most in league history.

With the win, the Tigers lock up a bid for the 2019 College Football Playoff. Clemson’s 2019 CFP appearance marks the fifth straight year this program has qualified for the playoffs. Of course, in 2016 and 2018 Clemson won the national championship.

Virginia drops to 9-4 on the season; the Cavaliers looks like they are bound for the Orange Bowl.