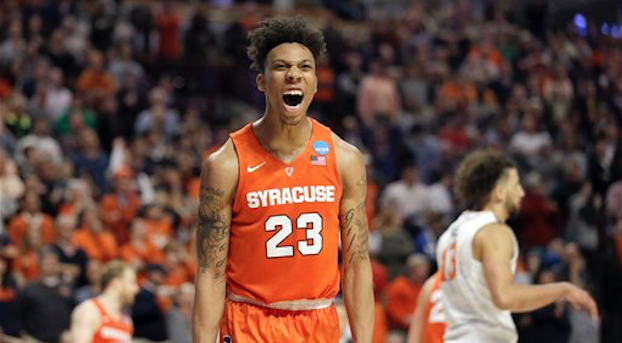 Malachi Richardson averaged 13.4 points and 4.3 rebounds per game as a freshman at Syracuse this past season. (AP Photo)

Syracuse freshman guard Malachi Richardson has informed NBA teams during the interview process that he is staying in the 2016 NBA Draft, according to ESPN.

Both Malachi Richardson & Cheick Diallo told teams in interviews today that they've decided to stay in the draft.

As a rookie this past season, the 6-6, 205-pounder averaged 13.4 points and 4.3 rebounds per contest, but he saved some of his best play for the end of the year.

Richardson played a major part in Syracuse’s Elite Eight comeback against Virginia, scoring 21 points in the second half while making key plays on both ends of the floor.

After Syracuse was eliminated by North Carolina in the Final Four, Richardson decline to make an immediate decision about whether or not he would declare for the NBA Draft. In mid-April, he made the call to test the waters.

This week, Richardson is participating in the NBA Draft Combine, which runs from May 11-15. Underclassmen who wish to withdraw from the draft must do so by the May 25 deadline.

Richardson is projected by DraftExpress.com to be taken in the second round of the draft with the No. 53 overall pick.