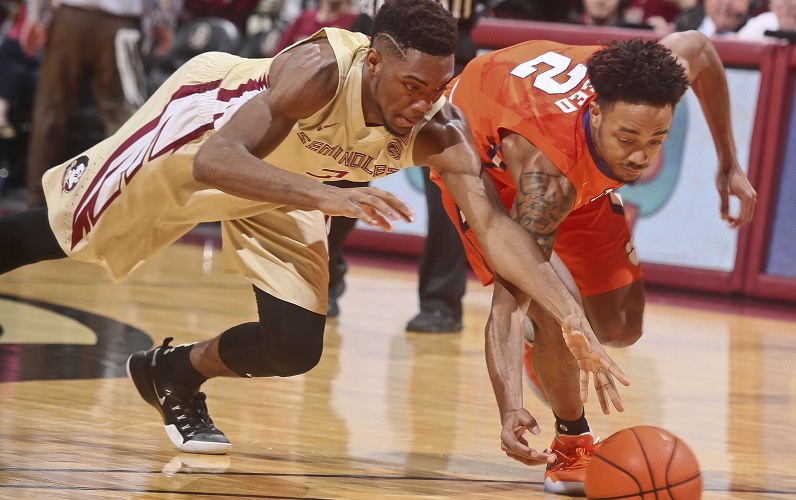 Marcquise Reed (right) and Clemson aren't out of the NCAA tournament conversation just yet. (AP Photo)

Under head coach Brad Brownell, Clemson hasn’t advanced to the NCAA tournament since 2011. But after key nonconference wins over Alabama, South Carolina and UNCW, the Tigers entered ACC play feeling good about their chances of returning to the Big Dance.

Led by one of the ACC’s top players in Jaron Blossomgame and buoyed by the additions of key transfers, the Tigers were thriving at the turn of the new year.

However, a six-game ACC losing streak in January diminished much of the hope. While the Tigers took down Pitt and Georgia Tech to temporarily stop the bleeding, three more ACC losses followed.

The overall strength of the ACC has kept Clemson in the conversation for a possible NCAA tournament bid. But time is running out.

Most bracketologists have the Tigers on the outside looking in. Joe Lunardi lists Clemson as one of his first four out in ESPN’s Bracketology. Jerry Palm of CBS Sports doesn’t list the Tigers at all. But with four winnable ACC games on the horizon, a window of opportunity is open for the Tigers.

Tuesday night’s game in Blacksburg is a must-win. Clemson could boost its postseason hopes by beating a Virginia Tech squad projected to make the Dance.

From there, the Tigers host Florida State, NC State and Boston College in Littlejohn Coliseum to close out the regular season.

Clemson won’t be favored against FSU. But the Seminoles have dropped four out of their last five road games, all by double digits. NCSU and Boston College have withered against ACC competition, and the Tigers should feel confident playing them at home.

There is very little margin for error. But a four-game winning streak to close the regular season would give Clemson an 8-10 ACC record — worthy of consideration on Selection Sunday. That would especially be the case if the team does damage in the ACC Tournament.

Should the Tigers fall short, however, Clemson nation will be left wondering what could have been. This year marked a golden chance for the Brownell’s program, and there’s still time to pull through.