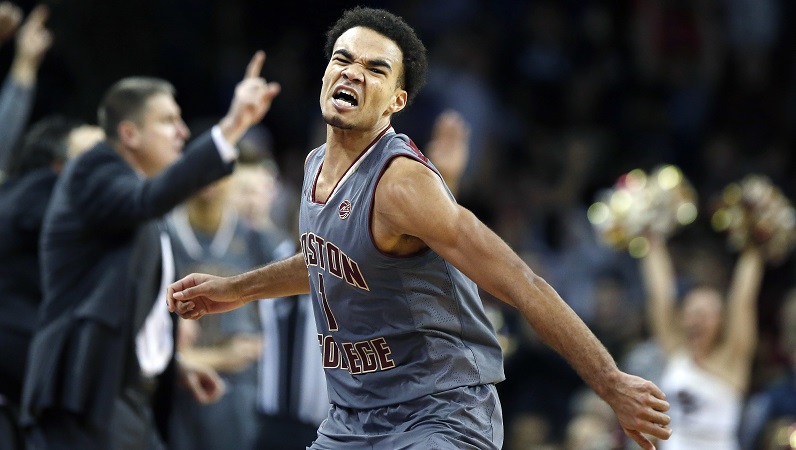 Boston College's Jerome Robinson (1) reacts after scoring during the second half of an NCAA college basketball game against the Duke in Boston, Saturday, Dec. 9, 2017. Boston College won 89-84. (AP Photo/Michael Dwyer)

After scoring 18.7 points per game as a sophomore at Boston College last season, guard Jerome Robinson has settled in as one of the ACC’s top overall players. This season, he’s once again averaging over 16 points per game, while shooting over 48 percent from 3-point range. Robinson is filling up the stat sheet each outing, averaging over three rebounds and three assists a game.

Although he was a relative unknown during most of his high school career, many around the ACC are now wondering how Robinson wound up at Boston College, and not one of the four North Carolina ACC schools. There are two simple answers.

What did they miss?

For starters, neither Duke, UNC, NC State, nor Wake Forest wanted him at the time. They would probably all go back and make different decisions today. But the bottom line is that none of the local ACC schools thought in the summer and fall of 2014 that Jerome Robinson was an ACC-caliber player.

Second, Robinson, as a prep junior, showed nothing even approaching the athleticism and dynamic scoring ability that he would in time at BC.

Robinson was a classic late bloomer who didn’t achieve as a potential high-major recruit until his senior season of high school. That season, Robinson averaged nearly 20 points a game and was named Cap 8 Conference Player of the Year. As a prep senior, Robinson developed the elite shooting touch and ball handling skills that helped him emerge into the top-tier ACC player he is today. But by the conclusion of his senior season, schools like Duke, UNC, and NC State had long since looked in other directions.

The case for each school

Robinson played his prep basketball at Broughton High School in Raleigh alongside NCSU head coach Mark Gottfried’s two sons, Cameron and Aaron. He often made his way over to the NCSU campus during his high school days to play with some of the Wolfpack players. But throughout all that time, it never occured to the NCSU staff to offer him a scholarship.

It didn’t occur to the staff at North Carolina either, despite the fact that Robinson was a self-admitted UNC fan growing up. The Tar Heels never seriously considered signing Robinson, instead focusing on current players such as Kenny Williams and Luke Maye.

Duke was never a possibility for Robinson, either. With Luke Kennard locked in early along the perimeter in the 2015 class, the Blue Devils never seriously entertained the possibility of Robinson. They would add two guards in the spring of 2015, but Brandon Ingram and Derryck Thornton came aboard without even a hint that Robinson was in the running for a late Duke offer.

Wake Forest showed more interest in Robinson than UNC, Duke, and N.C. State. But with Robinson’s recruitment peaking during Wake Forest’s transition from Jeff Bzdelik to Danny Manny, Robinson slipped through the cracks for the Demon Deacons as well.

By the early part of his senior year in 2014-15, Robinson still didn’t have a college home, despite the fact that he was rapidly developing into one of North Carolina’s top guards. In September of his senior year he made his way to Boston College – the one ACC school that prioritized him. Within three days, he was pledged to Jim Christian’s 2015 signing class.

The rest, as they say, is history.

In the end, the loss of Jerome Robinson for the North Carolina schools has been Boston College’s gain. And coming off a stunning victory over the previously top-ranked Blue Devils, the Eagles are looking to make some noise in the ACC this winter.

With Robinson motivated to save Christian’s job and improve BC’s ACC standing, North Carolina-based ACC fans will continue to lament the series of oversights that resulted in Robinson making his way to Chestnut Hill.