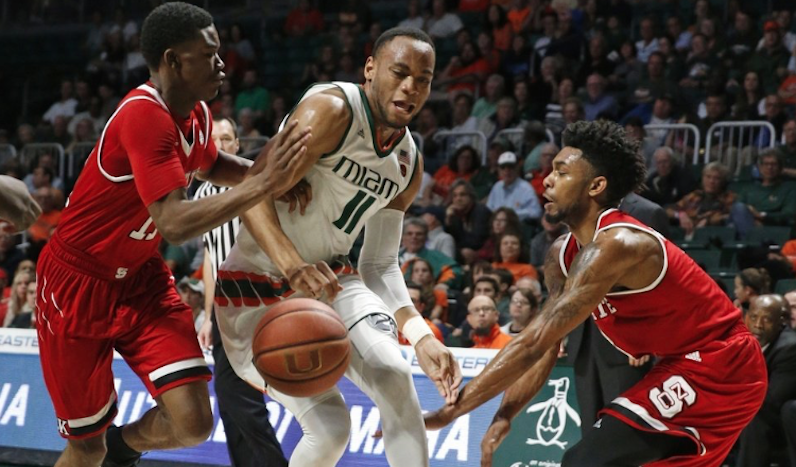 For Jim Larranaga, this must feel a little bit like starting a new job.

More and more, his Hurricanes are creeping from a feel-good story into a program with expectations. An afterthought no longer in a market that never cared about college basketball, Miami has a pair of Sweet 16 appearances under Larranaga. Entering his seventh season, the Canes have three NCAA tournament bids; that’s halfway toward matching the number of berths — six — UM had in its 50-season pre-Larranaga history.

The latest sign of the new heights Larranaga has achieved: NBC Sports ranked Miami No. 7 in its early preseason Top 25 poll.

That would be the highest preseason ranking for the Hurricanes. They have been ranked in either the preseason editions of the Associated Press or UPI/USA Today coaches polls only twice; in 1999, they were 25th, and in 2008, they were 17th. That’s it.

Given that spotty history, it’s hard to gripe too much about Miami being too high or too low in NBC’s poll. The fact UM is in there and is likely to be a top-15 program, at worst, when the AP and coaches polls come out? Well, from a holistic view, that’s remarkable.

To this view, the Hurricanes might be a bit too high, though. Losing program bedrock Davon Reed, a reliable scorer and versatile defender, could hurt. Miami doesn’t have a rebounder on the roster as good as Kamari Murphy, either. The biggest question is Ja’Quan Newton; if he hasn’t solved his turnover woes, can Miami just play him off the ball? Would he accept a lesser role as a senior, or would that lead to major locker-room issues?

READ MORE: Why did Jack Allison decide to leave Miami?

The reason for UM’s high ranking, of course, is the wealth of blue-chip players Larranaga has lured to Coral Gables. Bruce Brown projects as a fringe lottery pick in 2018, as does incoming freshman Lonnie Walker. Those two as the stars in the backcourt should make Miami an exciting team to watch. The continued development of forward Dewan Huell (like those two, he’s a former All-American and top-25 recruit) will be something to watch. If he’s ready to dominate in the ACC, Miami stands a chance of winning the league.

But some concerns remain. Miami’s depth issues — it still has two scholarships open and ready for use on a sit-out scoring guard and fifth-year big man — haven’t necessarily been addressed. Unless Huell, centers Ebuka Izundu and Rodney Miller and swingman Anthony Lawrence Jr. continue to round out their games, Miami will be playing a lot of guards. That may not be a bad thing, but it could hurt UM in some matchups.

The good news? Most of last year’s team is back and retains the feeling of losing to Michigan State in the first round of the tournament. If the pieces come together, the Canes will be going much deeper than that in March.

That, no doubt, will make the preseason prognosticators look smart.