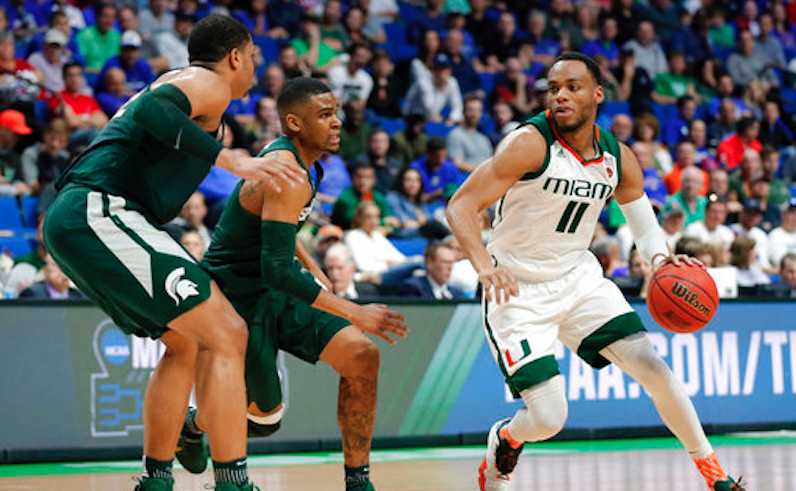 The history of the Miami Hurricanes’ basketball program isn’t a well-known or particularly storied one, so you’re forgiven if the best teams in school history don’t immediately spring to mind.

If next year’s team lives up to its potential, you may be able to skip over the past.

The Hurricanes will return a host of players from this season’s team, which went 21-11 and lost in the first round of the NCAA Tournament to Michigan State. They will also add arguably their best-ever recruiting class.

It’s a wildly interesting roster that could be the best team in school history.

Not that that’s saying a whole heck of a lot. UM hasn’t had legendary squads in its spotty run as a Division I program.

The best Hurricanes team never to do anything of note was certainly the 2001-02 group. That was when Perry Clark took a Leonard Hamilton-recruited roster that included future NBA players John Salmons and James Jones, former McDonald’s All-American Darius Rice and a quality college center in Elton Tyler and lost a first-round 5 vs. 12 matchup in March.

Hamilton had a younger Tyler, Salmons and Jones, plus guard Johnny Helmsley and center Mario Bland, on his Sweet 16 team of 1999-2000. That was the first UM squad to make it to that round.

The next of UM’s three Sweet 16 squads did it with a future first-round pick (sophomore Shane Larkin). Good pro-level seniors — like Durand Scott, Trey McKinney Jones, Reggie Johnson, Kenny Kadji and Julian Gamble — joined him. That was UM’s breakout season, when it earned a No. 1 AP ranking for the first time, a No. 2 seed and set a school mark in wins (29-7).

The other Sweet 16 run came in 2015-16, with NBA free agent Sheldon McClellan (who recently legally changed his surname to Mac) as its leading scorer, Angel Rodriguez at the point and Tonye Jekiri in the middle. Davon Reed and a sophomore-year Newton were complementary players. A good squad, but no first-round picks on that team.

Brown and Walker, right now, are in the top 15 of DraftExpress.com’s mock draft for 2018. Huell could join them or take another year to develop into a first-rounder (likely). It would certainly be UM’s first team with three first-rounders; Miami has had four in its history (Larkin in 2014, Salmons in 2003, Tim James in 2000, Rick Barry in 1966).

The history is there to be written.