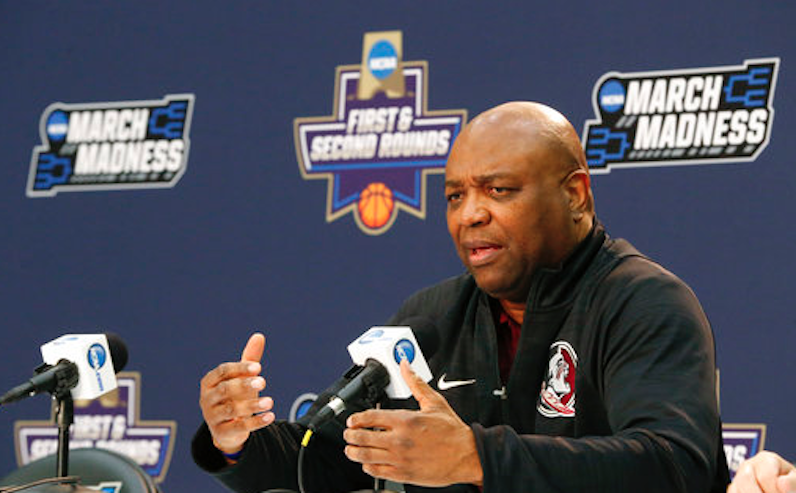 The ire toward Florida State head basketball coach Leonard Hamilton may have hit a new high over the weekend. Despite the greatest regular season in Hamilton’s tenure and one of the best in school-history, the 2016-17 campaign ended in disappointment as the Seminoles fell to Xavier in the second round of the NCAA Tournament, 91-66.

The 11th-seeded Musketeers dominated No. 3 seed FSU virtually from the start. After FSU jumped to a 5-4 lead, Xavier responded with a 21-5 run. Chris Mack’s squad maintained a double-digit lead for most of the day.

So, how much of that falls on Hamilton? The short answer is some, but not all.

For much of the season, the otherwise stellar FSU offense struggled when teams switched to a zone. It was not only evidenced in the loss to Xavier, but at times in the opening-round victory against FGCU. Throughout the course of games, the Seminoles did a fairly decent job adjusting to the zone defense. However, rarely did they ever come in prepared for it.

Another responsibility of a head coach is keeping his team upbeat. Hamilton told reporters following the loss on Saturday that after a Xavier trey in the second half, he felt the wind had gone out of his team’s sails. Outside of sharpshooter P.J. Savoy, the Seminoles didn’t seem to have much fight down the stretch.

Three-point shooting, though, was the story of the game for Xavier. After ranking outside the top 200 nationally in both treys made and three-point field-goal percentage, the Musketeers went 11-of-17 from deep on Saturday. FSU contested many of those makes, and some were from well beyond the three-point arc.

When a team is consistently making tough shots, there’s not much a coach can do.

With the loss, however, the Seminoles fell to 4-5 in the NCAA Tournament under Hamilton and 2-4 as the higher seed. In each of FSU’s last two tournament appearances, the Seminoles earned No. 3 seeds, and each time they failed to get past the first weekend.

As bad as Saturday’s showing was, it didn’t take away from the entire body of work of the season. The Seminoles finished undefeated at home for the first time since the mid-1970s, set a new school record for regular-season wins and fell one victory shy of tying the school record for total wins in a season. The way Saturday’s contest played out makes it hard to keep that perspective.

Hamilton’s naysayers will probably never truly be happy with anything he accomplishes at FSU. Some of the gripes have legitimacy. For example, eventual NBA Draft picks like Tim Pickett, Von Wafer, Al Thornton, Alexander Johnson and Malik Beasley never got to play in the tournament despite all their talent.

There have been years in the past under Hamilton where the team underachieved. Had the school decided to go a new direction, it would have been justified.

This season doesn’t come close to qualifying as one of them.