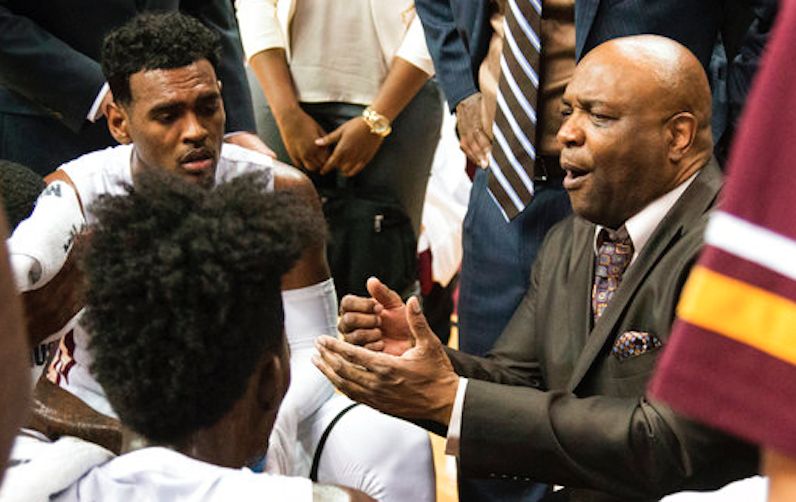 Leonard Hamilton has Florida State in the NCAA tournament for the fifth time. (AP Photo)

Ask Florida State fans what they think about head basketball coach Leonard Hamilton and you’ll get a mixed bag.

Those who have followed FSU hoops for the last couple decades can appreciate Hamilton for elevating the program from where it was. When Hamilton took over for the 2002-03 season, the Seminoles were coming off of four straight losing seasons.

Hamilton suffered two losing campaigns in his first three years on the job but none in the 12 seasons since. Over that span, the Seminoles have nine 20-win seasons and five NCAA tournament appearances.

Others, however, have pointed out that Hamilton hasn’t always maximized the talent he’s had on the roster.

For example, from the 2003-04 season until 2007-08, Hamilton produced NBA Draft picks. The most notable was Al Thornton, largely thought to be the greatest FSU player of the Hamilton era.

FSU missed the NCAA tournament in each of those years.

As with any coach in almost any sport, Hamilton will always have his naysayers. But this year’s NCAA tournament offers the winningest coach in FSU history the chance to enhance his legacy. The Seminoles are a No. 3 seed — just as they were in 2012 — but this team may be the most talented yet under Hamilton.

FSU will also play its first two games in the state of Florida (in this case, Orlando), where the Seminoles are 20-0 this season. If ever there was a Hamilton-coached FSU team capable of making a deep tournament run, it might be this one.

As with most coaches, however, part of Hamilton’s legacy will be based on how his teams performed in the postseason. Under Hamilton, the Seminoles are 3-4 in the NCAA tournament and just 1-3 as the higher seed.

In three of their last four tournament appearances, the Seminoles ended up on the wrong end of upsets. In the other, they lost to Gonzaga in the No. 8 vs. 9 matchup.

That’s not to say that great coaches don’t get upset in the first round. The legendary Bob Knight, for example, lost in the first round in nine of his final 19 appearances in the NCAA tournament. Knight, though, also won three national championships and went to two other Final Fours.

Aside from the aforementioned first-round loss to Gonzaga in 2010, FSU’s prior appearances under Hamilton include a loss to 12th-seeded Wisconsin in the vaunted 5-12 matchup in 2009 and an upset loss to sixth-seeded Cincinnati in the Round of 32 in 2012.

The Seminoles did get past the first weekend once under Hamilton — in 2011. That’s when 10th-seeded FSU fell in the Sweet 16 by one point in overtime to No. 11 seed VCU. The Rams later made a run to the Final Four.

Entering the 2016-17 season, most FSU fans would have been happy with just an NCAA tournament appearance. However, a spectacular season for Florida State has changed those expectations. With the first two games in Orlando, the Sweet 16 is the minimum that’s expected of the Seminoles.

Anything short of that and scrutiny will continue from a fanbase that’s still learning how to deal with being a solid basketball program. Anything beyond that, though, could lead to this Florida State team being talked about among fans for a long time.

Hamilton’s team certainly has the means to get there.