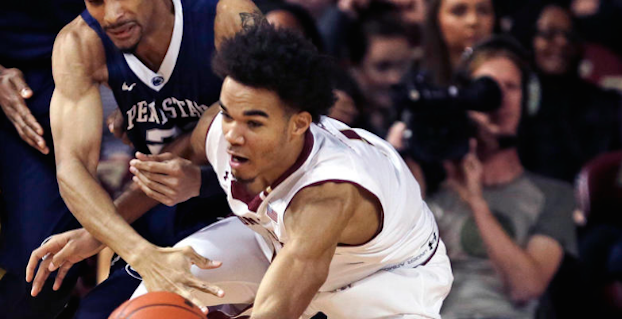 Jerome Robinson was second on Boston College in scoring with 11.7 points per game. (AP Photo).

It was a rough basketball season for the Boston College Eagles in 2015-16. The team went 0-18 in ACC play, and ended the season on a 19-game losing streak. One of their bright spots, however, was the play of freshman guard Jerome Robinson, who hails from Raleigh, N.C. Robinson finished second on the team in scoring (11.7 points) and shot 37.1 percent from beyond the arc.

Robinson made his debut appearance of The David Glenn Show where he discussed Boston College, the weather up north, playing at Broughton High School and why he chose to become an Eagle.

“I wasn’t really a big recruit coming out. A lot of people looked over me; I was just a kid in Raleigh. I picked up a lot of my offers late, and Boston College was the first ACC schools to offer me. I think that was a big reason why I went there, because I can be back home to play in front of my family and friends again. I mean, it would’ve been cool to stay in the Triangle, but the opportunity at Boston College was definitely a lot bigger.”