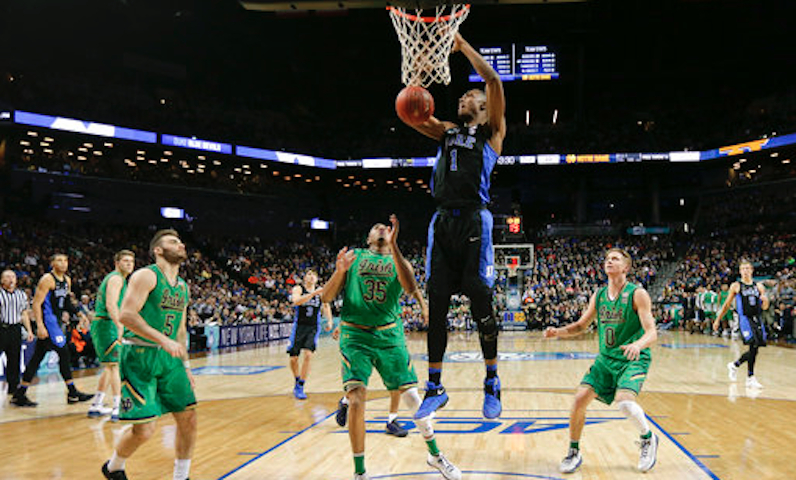 Duke freshman Harry Giles (1) might start creeping back up NBA Draft boards after his stellar play in the ACC Tournament. (AP Photo)

It took nearly the entire season, but Harry Giles finally looked like a first-round draft pick for Duke.

The 6-10 Giles, a freshman center from Winston-Salem, arrived in Durham as the top player in the 2016 class. That was despite two torn ACLs he suffered in both knees during his prep career.

An arthroscopic surgery to clean up loose bodies in one of the knees last October delayed his debut. He struggled through the ACC regular-season schedule, averaging 12 minutes, four points and four rebounds per game.

That’s not exactly the kind of stuff that launches a player into the draft lottery.

But Giles looked as healthy and comfortable as he had all season when Duke won four games in four days to claim the ACC Tournament championship at Barclays Center in Brooklyn. The center played 40 combined minutes over Duke’s final three games — wins over ranked teams Louisville, North Carolina and Notre Dame.

He blocked shots. He ran the court to complete breaks with slam dunks, and he grabbed rebounds.

So where might Giles stand with the NBA Draft? Become a premium member of ACCSports.com to see the rest of the article!