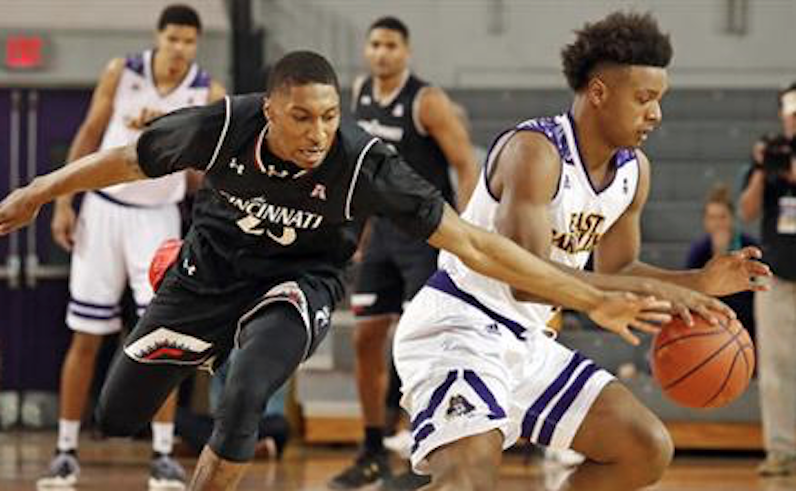 Syracuse’s basketball program has added a transfer as guard Elijah Hughes announced that he would be joining the Orange after one season at East Carolina. The 6-6 Hughes, a New York native, will have to sit out the 2017-18 season. He’ll have three seasons of eligibility with the Orange starting with the 2018-19 season.

Hughes announced in late April that he was transferring from ECU. He averaged 7.8 points per game as a collegiate newcomer, making seven starts.

In Hughes, the Orange are getting a long perimeter player who can rebound and defend. Hughes had a season-high six boards against UConn. He added at least one steal in 12 different contests.

The freshman scored in double figures in eight of the Pirates’ final 23 contests. He tallied 18 points against nationally ranked Cincinnati and 15 points against SMU in the AAC Tournament. His season high in scoring was 19 points versus USF in late December.

Hughes’ relationship with Syracuse freshman Matthew Moyer, who redshirted this past season, played a key role in his decision to join the Orange, per Syracuse.com. The two were teammates at South Kent Prep in Connecticut.

With Hughes on board, Syracuse has nine scholarship players for the 2017-18 season. Still in the midst of NCAA scholarship sanctions, the Orange will have 11 available scholarships for next season.

The Orange have added Howard Washington, a point guard, for next season. But Washington’s addition doesn’t necessarily help Syracuse in other areas along the perimeter. Syracuse has a glaring need for perimeter production after key losses the last two seasons.

Hughes has room to improve his three-point shooting. At East Carolina, he shot just 27.3 percent from long range. But with his defensive and athletic potential, Hughes will be an important piece for the Orange as soon as he’s eligible.

Will Tyus Battle be Syracuse’s next superstar?