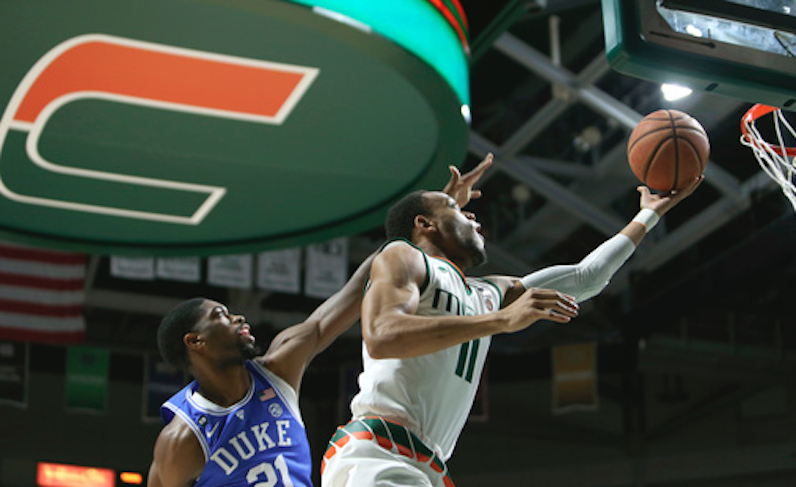 The media has taken a little bit of a beating from the general public of late, but Miami basketball fans respect ACC basketball reporters for doing their jobs.

Because as it relates to the All-ACC Freshman team, the league did not perform its duty.

That’s the only way to explain Bruce Brown being left off the list, which had five quality selections but only one or two as consistently good as Brown.

That would be NC State’s wunderkind, Dennis Smith Jr. He’s an obvious choice as top newcomer. Smith, fifth in points, first in assists and second in steals, was a slam dunk.

Similarly, Jonathan Isaac was a high-level force for Florida State, which finally put it all together and had a season to remember. No one would argue with Isaac’s strong defense (fifth in blocks, 12th in boards), especially since he was such a big part of a resurgent team.

The others were, again, OK choices. Jayson Tatum is a fine player for Duke, a potential lottery pick averaging 16 points and seven rebounds a night, but prone to shooting slumps. Josh Okogie is a strong contributor to a bubble-bound Georgia Tech, and Ky Bowman is one of only two standouts on a moribund Boston College squad. Fine players, all.

But anyone who saw more than a few minutes of Miami basketball this season knows Brown is a dynamic, stat-sheet-stuffing, mature-beyond-his-years force.

His stats — 11.8 points, 5.7 rebounds, 3.3 assists, 1.5 steals per game — don’t show how he took over in wins over UNC (30 points on 8-of-11 shooting), Duke (25 points on 11-of-18 shooting) and Virginia (game-winning three-pointer). He had the second triple-double in Miami history in nonconference play. He has been the best player on the floor on most nights. That may be a subjective judgment, but it doesn’t make it any less true.

Maybe Brown was left off because he didn’t rank as highly in the scoring column as Okogie (15th) or Bowman (20th).

The Atlantic Coast Sports Media Association, no longer an ACC-recognized voting bloc for postseason awards, actually got it right. In most of the categories, they voted in near-lockstep with most of the ACC’s “official” voters — a beat writer and a head coach from each school — but in the rookie race, ditched Bowman in favor of Brown. Funny, because Triangle-area bias was apparently a reason for stripping ACSMA of its voting cred.

For the ACC’s new voting bloc to not have Brown on its list is, in the small window of awards voting, criminal.

Maybe they didn’t watch much of Miami.