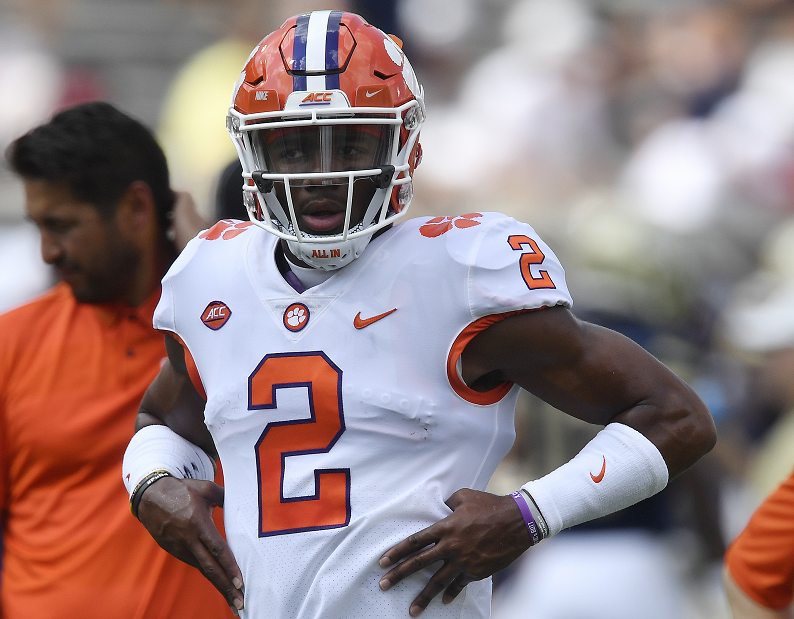 Clemson quarterback Kelly Bryant (2) warms up before the first half of an NCAA college football game between Georgia Tech and Clemson, Saturday, Sept. 22, 2018, in Atlanta. (AP Photo/Mike Stewart)

For the second straight year, Clemson found itself in a dogfight with Atlantic Division rival Syracuse on Saturday. And while the circumstances were much different this time around, once again the Tigers found themselves unable to rely on veteran quarterback Kelly Bryant in the second half.

Last year, Bryant was knocked out with a concussion in the first half of Clemson’s 27-24 loss to the Orange in the Carrier Dome. This year, Bryant would have been positioned to enter the game following a head injury suffered in the first half by new Tigers starter Trevor Lawrence. But Bryant had made the decision to transfer from Clemson in the days immediately following the news that Dabo Swinney was benching Bryant in favor of Lawrence.

A collective gasp could be heard inside Memorial Stadium following the big hit that Lawrence took along the sideline courtesy of Syracuse’s Evan Foster. In the midst of an aggressive launch for a first down, Lawrence took a hard shoulder, dropping him to the ground.

Although the prognosis was optimistic after the game, Lawrence did not return as the Clemson medical personnel went through concussion protocol with the talented rookie.

Chase Brice, an under-the-radar third-stringer who went 37-4 and won a state championship in high school, came on and led the Tigers past Syracuse, keeping their College Football Playoff hopes strong for another week.

With Lawrence’s injury, speculation ran rampant during and after the Syracuse game that Bryant might just return to Clemson and be in the lineup again this coming week. Technically, he is still enrolled at Clemson for the moment.

But Swinney poured cold water on that notion with his postgame comments.

Although Swinney said ‘I don’t know’ when asked specifically if Bryant could return, he added a terse, ‘We’re moving on’ as he concluded his statements on the departed Clemson quarterback.

“I’m not entertaining any questions on guys that aren’t here,” Swinney said.

Given the emergence of Brice, and Bryant’s decision to transfer in midseason – a decision that was met with disappointment and some anger in the Clemson locker room – it doesn’t seem likely that Bryant just can waltz back in this week, and everything will be back to normal.

Since he has played in only four games so far this fall, Bryant can take advantage of new NCAA redshirt rules. He will be able to keep his year of eligibility, assuming he doesn’t take another snap this year. And as a graduate transfer, he can play immediately.

So where will Bryant end up?

Arkansas was immediately brought up as a strong contender for Bryant, due in large part to Bryant’s relationship with former Clemson offensive coordinator Chad Morris.

Morris recruited Bryant to Clemson, and served as a mentor until his departure to SMU, and most recently Arkansas. The Razorbacks benched opening game starter Cole Kelley in favor of Ty Storey, but the pair combined for seven interceptions against six touchdown passes as Arkansas got off to a 1-3 start. Bryant could be the perfect solution to run Morris’s fast-paced offense for a year.

Within the ACC, in-state rivals North Carolina and NC State could be realistic possibilities for Bryant if it doesn’t work out with Arkansas.

UNC’s quarterback play has been atrocious through the initial third of the season, while NCSU will be losing Ryan Finley after the 2018 season.

UNC’s current offense is more specifically geared to Bryant’s style than NC State’s. But with Larry Fedora’s job security shaky at best, the Wolfpack – a much more stable program at the moment – could be a more appealing destination if Bryant chooses to stay in the ACC.
[/woocommerce_members_only]