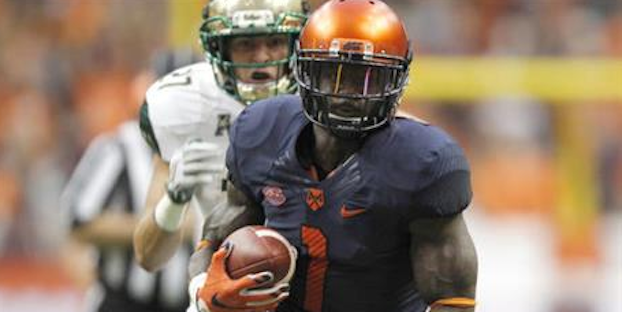 Brisly Estrine has 12 receptions and two touchdown on the season. (AP Photo).

A 1-2 start to the season was certainly not how Syracuse would’ve hope to have launched the tenure of Dino Babers. After a win against Colgate in week one, Syracuse has gotten smoked the last two weeks by Louisville and South Florida; the Orange currently have a point-differential of minus-45. But Babers promised to play fast, and they’ve done just that: Syracuse currently leads the nation in pace. Bowling Green ranked 12th nationally in pace a season ago when Babers was leading their program.

Last Saturday against South Florida, Syracuse ran 109 plays — the high water mark for the FBS so far this season. The week before, in their loss to Louisville, the Orange ran 96 plays, which was the fifth most in the nation that week. They’ve run 291 plays through their first three games of the season — an average of 97 per game.