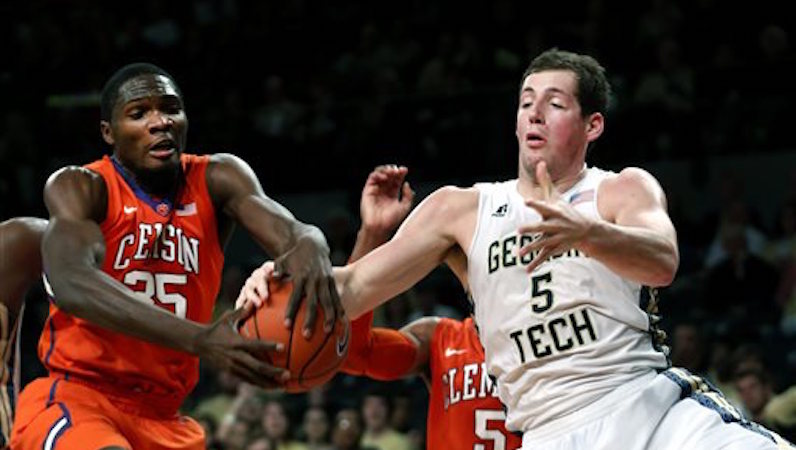 A key in Clemson’s struggles on the hardwood this season has been the team’s slumping defense. Per KenPom.com, the Tigers have posted the worst defensive efficiency rating of coach Brad Brownell’s seven seasons with the program: 101.2 points per 100 possessions.

That ranks No. 95 in the nation; prior to this season, a Brownell-coached Clemson team had never finished outside of the top 65 in defensive efficiency.

Clemson returned most players from last season’s 17-14 squad. However, the team had to part ways with one critical defender: Landry Nnoko.

Nnoko not only led the ACC in blocks per game (2.3) and block rate — rejecting 11.2 percent of opponent two-point field goals while on the floor (No. 11 in the nation, per KenPom), but he was also critical in the team’s pick-and-roll defense. Clemson has regressed in several departments on that end of the floor, but teams love running this type of action, and opponents have hit the Tigers where it hurts.

In 2015-16, Clemson was excellent in pick-and-roll coverage. According to Synergy Sports, the Tigers allowed just 0.63 points per possession to ball-handlers in pick-and-rolls, which ranked No. 13 in the nation and was tops in the ACC. Clemson forced these players into a lowly field-goal rate of just 32.6 percent.

The Tigers were even better, however, when the opposing roll man finished the possession. Clemson allowed just 0.76 points per possession to screen-roll guys, which ranked No. 17 nationally and was also the best number in the ACC, according to Synergy. Opponents shot a paltry 37.5 percent on said action (No. 2 in the ACC) and scored on just 35.6 percent of these possessions. It takes a team effort to be this good at stymying pick-and-rolls, but obviously Nnoko, who was involved defensively in the actions, gets a lot of credit, too.

This season, though, Clemson has had a fall from grace. The Tigers have done mostly well checking pick-and-rolls when the ball-handler has used the possession. Per Synergy, Clemson has allowed 0.71 points per possession (No. 92 in the nation), which ranks fourth in the ACC. Even though Clemson is forcing more turnovers on this action (24.8 percent turnover rate, up from 19.2 percent last season), opponents are shooting just a hair under 40 percent.

A far more notable regression, however, has occurred when guarding rollers. Again, it is a team effort, but Elijah Thomas and slow-footed Sidy Djitte have leaked water here, which has caused the boat to capsize.

According to Synergy, Clemson has allowed 1.13 points per possession to roll men on pick-and-rolls this season — an increase of 0.37 points from last year. That ranks 302nd nationally and is in the bottom-third of the ACC. The Tigers are fouling opponents at a similar rate; Clemson commits a shooting foul on 7.7 percent of these possessions.

The real issues are a reduced turnover rate (6.6 percent) and a dramatically improved field-goal percentage — 54.3 percent (No. 10 in the ACC), which is an increase of nearly 17 percent. Yikes. Opposing roll men have scored on nearly 52 percent of their possessions against Clemson this season, per Synergy — another big red flag.

There is a reason Nnoko landed on the 2016 All-ACC Defensive Team. His departure has been felt this season in more ways than one.