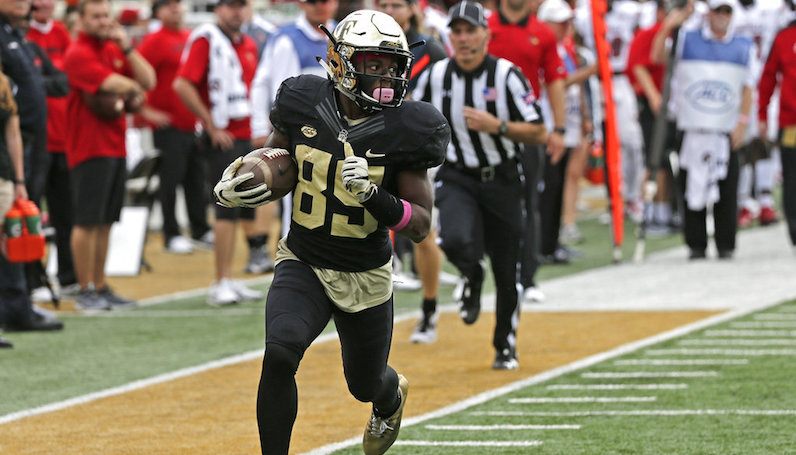 Wake Forest's Greg Dortch (89) runs after a catch against Louisville during the first half of an NCAA college football game in Winston-Salem, N.C., Saturday, Oct. 28, 2017. (AP Photo/Chuck Burton)

Shortly after Wake Forest’s most exciting win of the season — a payback affair against Louisville — the Demon Deacons received some unfortunate news. Freshman Greg Dortch, a receiving dynamo, will miss the remainder of the 2017 season with an abominable injury.

Dortch snagged 10 passes for 167 yards and four touchdowns on Saturday; it was a historical performance for the rookie receiver.

It wasn’t just the Louisville game, though. Greg Dortch has been a monster for Wake Forest all season. The Demon Deacons are now down their most valuable offensive player; here’s a look at what they will miss, and who needs to step up.

According to Football Study Hall, Dortch has far and away been Wake Forest’s most involved skill player. Wake’s offense has targeted Dortch 74 times this season — No. 1 on the roster, by a mile. He has 53 receptions, which translates to a sizzling catch rate of 71.6 percent.

In the victory over Louisville, Dortch caught all 10 of the targets thrown in his direction; that’s simply outstanding.

Within the ACC, Dortch ranks fifth in receptions (53), second in yards (722) and first in touchdowns (9). The freshman also has eight receptions of 30-plus yards — tops in the ACC — and 11 catches of 20-plus yards, second in the league.

Dortch is also one of only three FBS players this season with at least 50 receptions, 700 yards and nine touchdowns, per Sports Reference. Wake Forest hasn’t had a 1,000-yard receiver since Chris Givens in 2011; Dortch was on pace to get there. That will have to wait until 2018 now, though.

The loss is twofold, too. Dortch is a playmaker for the Deacs on special teams as well. He’s returned a combined 38 kicks and punts for a total of 559 yards. The leaves out that he had a 95-yard kick return brought back for a touchdown earlier this season, which was brought back by a penalty.

Who can step up?

On paper, junior receiver Tabari Hines entered as the most likely Demon Deacon to make a splash on offense…or so I thought. Hines does rank second on Wake Forest’s roster in terms of receptions, but the gap between he and Dortch is massive. Hines has just 18 receptions, and has actually been targeted less than Scotty Washington, per Football Study Hall.

Wake Forest simply hasn’t found a way to incorporate Dortch and Hines together. Well, unfortunately, that paradigm has shifted. Wake Forest still has a lot to play for; a great deal of its offense is up for grabs now. Greg Dortch was targeted on over one-third of Wake’s pass attempts. Hines and Washington both have big opportunities now.

Tight end Cam Serigne, who has five touchdown receptions in 2017, has been a featured pass-catcher, too. Wolford can look to him as well.