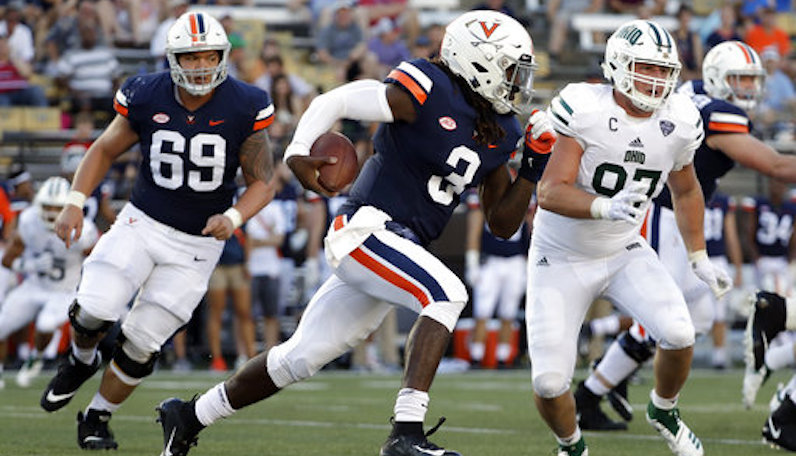 It’s early on but Virginia football looks like that kind of team that would be happy to win a defensive-minded rock fight every Saturday. And with a defense ranks 25th in the FBS is Success Rate, according to Football Study Hall, that’s a perfectly fine formula. However, with Bryce Perkins running the show on offense, perhaps UVA can find success in more than one way this season.

Last December, much was made when Perkins committed to Virginia; in theory, he would finally provide Bronco Mendenhall the type of quarterback who could challenge defenses with both pass and run abilities. The hype continued into the spring and summer, when Perkins flashed all kinds of tools on the Charlottesville practice fields.

Through the first four games of the 2018 season, Virginia is 3-1 and Perkins has been excellent. The 6-foot-3 quarterback has completed 65.7 percent of his passes (8.5 yards per attempt) for 867 yards and nine touchdowns — to just two interceptions.

The highest passing grades from ACC QBs in Week 4 pic.twitter.com/HoLgEa6cru

His top target is, unsurprisingly, Olamide Zaccheaus. During his first three seasons at UVA, Zaccheaus caught 157 passes on 248 targets, per Football Study Hall — a catch rate of 63.3 percent. In 2017, he was one of the most targeted players in the ACC: 140. Virginia has targeted Zaccheaus on 35.6 percent of its pass plays; he has 24 receptions on 37 targets — for 397 yards and four touchdowns.

Perkins also has two 100-yard rushing performances, including one against a pretty good Indiana team; for the season, he’s run for 317 yards and three touchdowns on 62 carries (5.1 per carry). Currently, he’s one of only nine FBS passers with at least 700 pass yards and 200 rushing yards. Of that group, Perkins is the only FBS player with 800 pass yards and 300 rushing yards.

He’s counted for some of those yards in style, too; check out this Diet Lamar Jackson-type run in the win over Louisville.

Yo! To do this mid-stride, at full speed, is wild.

According to Football Study Hall, which adds yardage lost from quarterback sacks back into rushing totals, Perkins has run for 365 yards on 54 carries (6.8 yards per carry) — with an average of 6.9 Highlight Yards per Opportunity.