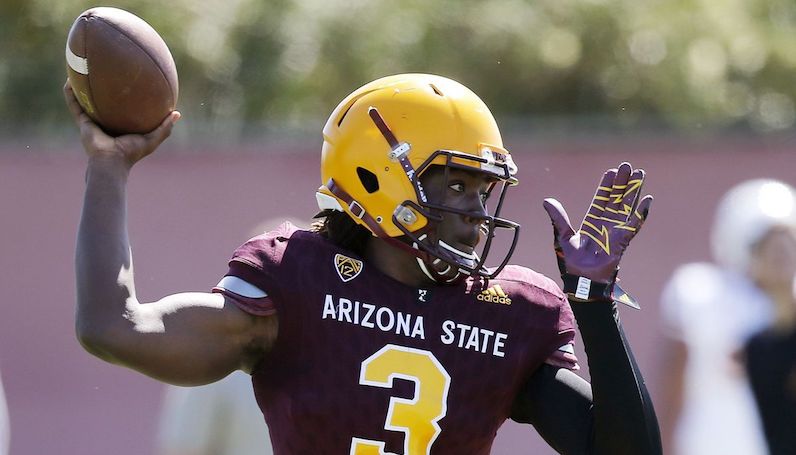 Now Bronco Mendenhall has HIS quarterback.

Last week, we took a look at Virginia’s QB situation and estimated rising sophomore Lindell Stone had about a 50-50 shot at starting for the Cavaliers next fall, but the UVA coaches were looking for a transfer who might be able to add depth and experience immediately.

Tuesday, the Cavs got just that with the commitment of Bryce Perkins out of Arizona Western Community College. The starting job is probably Perkins’ to lose at this point. That would Stone, depending on pending legislation could reclaim his redshirt year after playing in just one game, another season to mature and develop as the primary backup.

Meanwhile, Bryce Perkins gives Virginia the style of quarterback it’s been looking for since Mendenhall and his staff took over two years ago. Perkins is a true dual threat who just a few days ago threw for 139 yards and a touchdown and rushed for 104 and another score in the JUCO national championship game.

At 6-3, 215 pounds, the UVA coaches are already talking to Perkins about using him more like they did with Taysom Hill at BYU than Kurt Benkert at UVA. The Cavs were very fortunate to get Benkert as a graduate transfer from East Carolina two years ago, evidenced by his breaking the school’s single-season passing record an leading the Hoos to the Military Bowl.

But Benkert was also taken quickly and out of a desperate need to upgrade the talent level in a hurry. As more of a pro-style passer with a knee and a shoulder that limited how much he ran with the ball, Benkert wasn’t ever the ideal fit for the system, but the Virginia coaches made adjustments to play to Benkert’s strengths.

But Mendenhall hasn’t made much a secret of his desire to recruit a quarterback in the mold of Hill, and if Perkins lives up to expectations in Charlottesville we could see a much different looking offense from UVa next season. Perkins told Wahoos247.com that when he’s watched film with the Virginia coaches, they’ve focused on video from their BYU days.

Otherwise, Perkins’ arrival at UVA follows a similar pattern to Benkert. He was a highly anticipated recruit to Arizona State, but a neck injury pushed him down the depth chart. After playing this season at Arizona Western, where he threw for 1,311 yards and rushed for 518, he’ll arrive at UVA ready to play immediately with two years of eligibility.

There may be some adjustment to the Power 5 level from JUCO, but Bryce Perkins played against solid competition, coming out of the same conference as UVA offensive tackle Brandon Pertile. He’ll also enroll in January and be in camp for spring practice, which should provide a head start toward revamping the offense around the new quarterback’s style.

It’s been quite rare for Virginia to go the JUCO route in recruiting, but all-in-all, this is pickup that makes quite a bit of sense for a UVA program that wants to continue to build on the momentum of making its first bowl game since 2011.