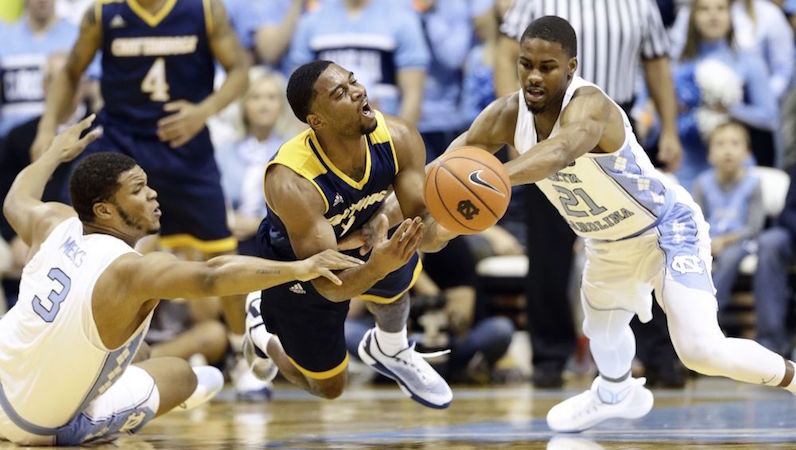 Seventh Woods has a big offseason on the horizon as he approaches his sophomore campaign. (AP Photo)

It remains uncertain how North Carolina’s basketball roster will look next season. Tony Bradley still has an NBA Draft decision on the horizon and may not be back in Chapel Hill for the 2017-18 campaign. We do, however, know that rising sophomore point guard Seventh Woods will be on the floor for the Tar Heels.

Woods’ freshman season was an up-and-down affair. His spot in UNC’s rotation was constantly in motion. He never scored more than nine points in a game, and over the final month of the season, he played double-digit minutes just one time: 15 minutes against Texas Southern in the opening round of the NCAA Tournament. Woods, plagued by turnover issues, scored only four points over his final 13 games of the season.

But Woods has a serious skill set — great size for the point guard position, daring athleticism and an unselfish disposition. He played a role in the team’s championship run, and more will be expected of the once highly touted recruit in the future. Here is how Woods can find a larger niche with next season’s Tar Heels:

The return of Joel Berry is a serious boon for North Carolina. Woods will operate as his backup, which is a nice point guard platoon for Roy Williams. But if the sophomore is to maximize his playing time, he may have to spend time off the ball, too.

This means that Woods needs to make significant strides as a shooter. He shot just 28.3 percent from the field and under 31 percent on three-pointers. According to Synergy Sports, in the half-court setting Woods made just 15 percent of his jump shots.

Of course, with this tandem, Berry could work well off the ball as a gravity-pulling shooter. Sets that were run to free Justin Jackson for three-pointers in 2016-17 will go now to Berry and Kenny Williams.

A big step for Woods will, of course, be improving his pick-and-roll game. According to Synergy Sports, Woods shot 35.3 percent out of the pick-and-roll in 2016-17. That actually is not too bad; in fact, it is a higher clip than what Steve Vasturia, Jerome Robinson and Jayson Tatum posted. However, the problem exists with turnovers. In pick-and-roll possessions, Woods coughed the ball up 20 percent of the time.

Woods is certainly capable of reading the defense and using his height to see over the top and find cutters. Watch him quickly defeat a trap Kentucky threw at him in the Elite Eight; this pass is in Tony Bradley’s hands before you can blink.

What a find by Seventh Woods! #Elite8 pic.twitter.com/ESex7ErVmD

Woods’ assists numbers are strong as well. According to Sports Reference, he assisted on 22.4 percent of his teammates’ made field goals when on the court; the freshman averaged nearly nine assists per 100 possessions, too.

Roy Williams will always preach the importance of defense, which is not unlike any other basketball coach. Berry is the team’s floor general; the ball will be in his hands. However, Woods can look to become a two-way player for the Heels. The framework is already there.

UNC allowed an estimate of less than 0.95 points per possession when Woods was on the floor — the second-best number amongst North Carolina’s rotation players. Additionally, opponents shot under 30 percent on field-goal attempts defended by Woods, per Synergy Sports. With Pinson returning, he and Woods could form a nasty defensive duo on the wing for UNC.