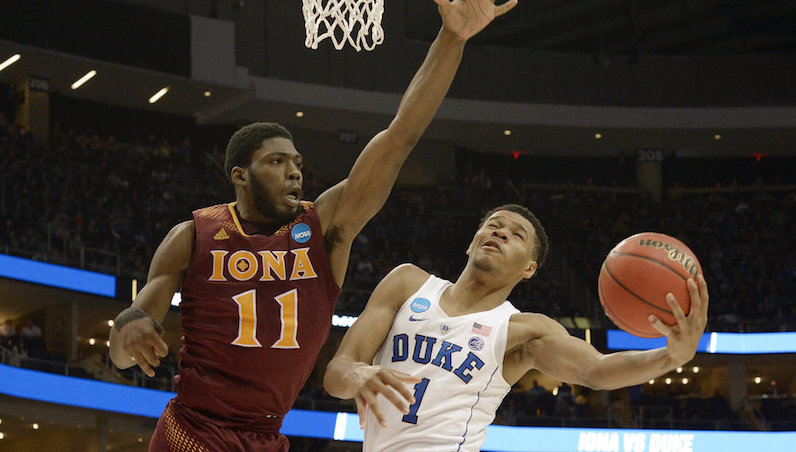 I fully understand that it was just one game, and it came against a 15 seed Iona team, but that’s the Trevon Duval performance that should keep assistant coaches from every other title-contending team awake at night. It’s also something that should catch the eye of NBA talent evaluators, too.

This is reductive, but: When Duval plays like that in the half-court, there’s basically no stopping Duke; you will have to outscore them.

Duval scored 19 points — three off tying his career high — on 7-of-11 field goal attempts, including a career-best four three-pointers, three of which came from the wing/corner. According to Synergy Sports, Duval went 5-of-9 on shot attempts in the half-court — a big, positive indicator for the Blue Devils.

As a distributor, Trevon Duval handed out eight assists — or 38.3 percent of his teammates’ made field goals while on the floor. Four of those assists went to three-point shooters: Grayson Allen (twice), Marvin Bagley and Gary Trent. The other four dimes went to finishes at the rim — three dunks (Bagley twice, Wendell Carter too) and a layup (Trent).

In total, this translated to 20 points for Duke.

This still wasn’t a spotless performance for Trevon Duval, who turned the ball over four times in 31 minutes of action — a turnover rate of 26 percent.

For the season: Duval has a turnover rate north of 23 percent, according to KenPom. Duke’s transition defense is pretty good — 0.97 points per possession, 6th in the ACC, according to Synergy — but live-ball turnovers can be a killer.

Up next for Duval and Duke: The Rhode Island Rams on Saturday. The Rams ranks 37th nationally in adjusted defensive efficiency, and fifth in opponent turnover rate (22.7 percent).