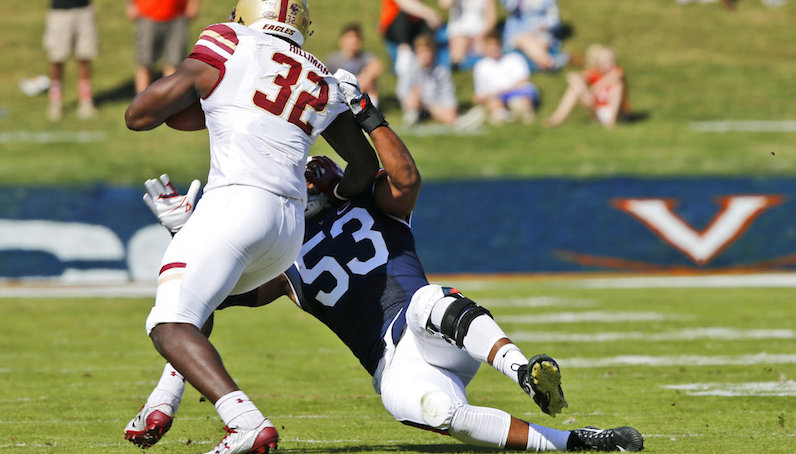 In Charlottesville, 2017 could become a season of firsts for Virginia football. The Cavaliers became bowl eligible the first week of November with a win over Georgia Tech — for the first time since 2011.

Two other achievements could be on the horizon, too. First, quarterback Kurt Benkert is only 124 yards shy of becoming the first 3,000-yard passer in UVA history. Secondly, and more pressing: Virginia hasn’t defeated rival Virginia Tech since 2003.

For that to change, Bronco Mendenhall will need at least one more heroic performance from senior linebacker Micah Kiser.

One of a kind

For the third straight season, Micah Kiser has recorded over 100 total tackles and at least five sacks. According to Sports Reference, he’s one of only two FBS players with 100-plus tackles and five sacks this season.

Over the last 18 seasons of ACC football — dating back to 2000 — this has happened only 12 times. Kiser accounts for three of those seasons.

The 6-foot-2, 24o-pound linebacker could have left for the NFL after a strong 2016 season; however, his production this season should only reaffirm his stock has one of the best edge rushers in the college ranks. The same could be said about teammate Quin Blanding.

Kiser has eight tackles for a loss this season (No. 2 on the team), and 10 run stuffs (No. 1 on the team), per Football Study Hall. Run stuffs account for tackles that occur behind and at the line of scrimmage.

Kiser has teamed up with Jordan Mack, Chris Peace, Chris Moore and Malcolm Cook to form a porten linebacking crew for Bronco Mendenhall, who certainly has a good track record of working with linebackers. According to Football Study Hall, Virginia’s linebackers have either recorded a tackle for loss, defensed a pass or forced a fumble on 6.1 percent of the plays they have faced. That ranks No. 12 in the nation.

That also ranks second best in the ACC — between Clemson (5.5 percent) and Louisville (8.2 percent).