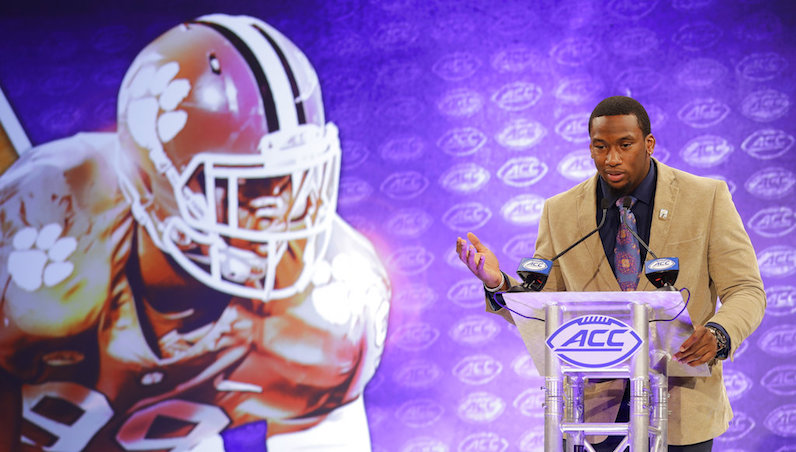 The first ACC player selected in the 2018 NFL Draft was Bradley Chubb — a defensive end from NC State, who went fifth overall to Denver. Chubb was a force in the ACC for several years; in 2017, he was the only player in the conference to record double-digit sack numbers.

Even with Chubb gone — along with fellow draft picks like Josh Sweat, Duke Ejiofor and Harold Landry — the league is still loaded at the defensive end position. Here’s a look at the ACC’s best — with Clemson (Clelin Ferrell and Austin Bryant), unsurprisingly, leading the way.

The 2017 season was a resurgent one for the Miami Hurricanes — 10 wins, multiple late-season weeks in the AP top 10 and a de facto playoff contest in the ACC Championship game (which they lost by 35 points).

Miami survived by coming out on the right end of every one-score game they played in (4-0), and utilizing its powerful defense, which was led by the defensive front. The Turnover Chain-powered Hurricanes finished inside the top six of the FBS is both sacks and turnover margin. According to Football Study Hall, Miami’s defensive line ranked fourth nationally in Havoc Rate (8.8 percent) — the percentage of plays a position group records a tackle for loss, forces a fumble, or defenses a pass.

Jackson also had 16 runs stuff, per Football Study Hall — run plays stopped at or behind the line of scrimmage.

In Year One of Willie Taggart, it’s time for Brian Burns to lead Florida State’s defense. He seems ready, too, with first-year defensive coordinator Harold Barnett turning up the aggression on that side of the ball.

As a pass-rushing specialist in 2016, Burns collected 9.5 sacks — a top-10 number in the ACC, and the most of FBS freshman. That number dipped to 4.5 in 2017, but Burns bagged 13.5 tackles for loss, and 13 run stuffs, per Football Study Hall. During his sophomore season, Burns forced three fumbles (two against Clemson), recovered one fumble and defended four passes.

FSU had plenty of issues in 2017, but the defense remained solid, and the defensive line ranked No. 5 nationally in Havoc Rate: 8.7 percent.

Burns from ACC media days on the new defense:

It’s a quick adjust. I mean, it’s not too difficult. It’s a defense that allows you to play rather than think, so we’re able to play fast, physical and aggressive, and everything is pin your ears back and go. We’re going to get after it, and it’s not really that hard to adjust to.

The pieces are in line: the Tigers have one of the best defensive lines in college football history. The 2018 preseason All-ACC roster’s defensive line was composed entirely of players from Clemson, including, obviously, Bryant. How do you block these guys? It remains to be unseen.

Clemson’s defense finished second nationally in both S&P-plus and efficiency last season, according to Football Study Hall. Bryant (11) was one of five Tigers with at least 10 run stuffs, too.

In 2017, Zach Allen was the only defensive lineman in the ACC to record at least 100 total tackles; he also collected four sacks (10 for his career now), and an interception off — once again — Josh Jackson of Virginia Tech.

Boston College's Zach Allen has recorded more stops than any other edge defender this season. pic.twitter.com/Xav1z7Rfcy

According to Football Study Hall, Allen recorded 23 run stuffs in 2017, which was second most in the ACC — behind only Chubb, of course.

From ACC media days — Allen on what he learned from Harold Landry:

Harold was a great role model how to conduct yourself. He was a true professional in all facets on the field and off the field, and I think just kind of following his example, leading into last year, kind of helped me learn how to be a true professional football player. And I think kind of helped me with that breakout year, just seeing how this all facets of his life, nutrition, working out extra, whatever it is, he really was a great example.

Say hello to your new sack-god in ACC football: Clemson’s Clelin Ferrell. After a monster 2017 season — 9.5 sacks (second in the ACC) for minus-57 yards, 66 total tackles, 18 tackles for loss — Ferrell is back to do some more damage.

With Dexter Lawrence and Christian Wilkins wrecking shop on the interior, and Austin Bryant drawing attention on the other side, Ferrell has carte blanche to get after opposing ball-carriers. Ferrell, who forced two fumbles last season, also recorded 10 run stuffs, per Football Study Hall.

As amazing as the individual numbers are for Ferrell, there’s obviously some cannibalization here, too. These guys, no doubt, playing together, makes things easier for one another. That’s obvious; however, there are simply fewer opportunities to collect numbers if a teammate beats you to the punch. The tradeoff is well worth it, though.

Clemson is in insanely lofty territory as a program — contending for titles on an annual basis, along with Ohio State, Alabama and Georgia, while also creating an assembly line to the NFL.