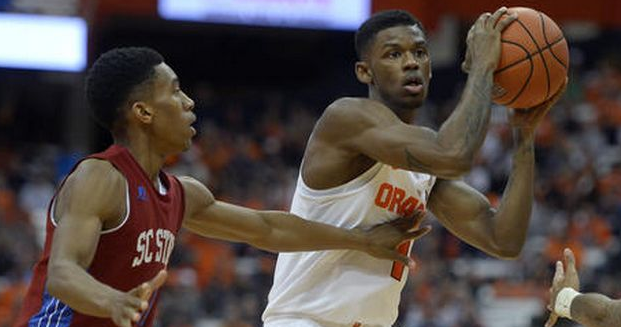 Syracuse has a quick turnaround between their surprising loss in Brooklyn against South Carolina, and their ACC/Big Ten Challenge matchup — Tuesday night at Wisconsin, the No. 17 team in the country.

There’s a lot to like with the Orange this year; they’re one of Ken Pomeroy’s top 10 teams in the nation. Led by their stars Andrew White and Tyler Lydon, Syracuse currently ranks eighth nationally in three point shooting percentage — 43.9 percent, which is smoking. Their 2-3 zone has, as usual, been effective at limiting opponent scoring; according to KenPom, Syracuse ranks No. 6 in the nation in defensive efficiency: 89.5 points per 100 possessions.

What’s slipping under the surface, though, has been their point guard play, courtesy of John Gillon and Frank Howard. The Gamecocks confused Syracuse’s two ball-handlers over the weekend by mixing up defenses. South Carolina used a combination of 3-2 zone and man-to-man against Syracuse, which proved to be an early season headache.

However: outside of that challenging performance, Gillon and Howard have done well running the show, and the numbers bear that out, too.

Gillon, after two seasons at Colorado State, has proven to be a rather efficient player since his arrival. The graduate transfer is shooting 46.7 percent on three three-point attempts per game. Gillon’s averaging 1.8 turnovers per game, but five of his nine turnovers this season came in that rough outing against South Carolina.

According to Pomeroy, Syracuse has assisted on 65.7 percent of their made field goals, which ranks No. 12 in the nation; that’s up for 56.3 percent a season ago. When Gillon is on the court, he’s assisted on 39.5 percent of Syracuse’s field goals — a number that ranks 23rd in the nation, per KenPom. This, however, has been outdone by Howard, who has really taken on the playmaking role for the Orange. Howard leads the nation in assist rate; he’s assisted on nearly 52 percent of Syracuse’s made field goals when he’s on the floor. That’s a number that would make Chris Paul and Rajon Rondo proud.

Howard, who is shooting 57.1 percent from beyond the arc, leads the ACC with 6.4 assists per game; Wake Forest’s Bryant Crawford is second with six per contest. On two-point field goals, Howard is connecting at a 60 percent clip. The sophomore guard has put forth an excellent season thus far for coach Jim Boeheim.

The two point guards actually stand one and two in the ACC in terms of assist rate — the percentage of their team’s field goals a player assists one while on the court.

Boeheim will occasionally play the two together, but so far this season, he’s experimented very little with dual point guard lineups; the second guard slot is usually reserved for freshman Tyus Battle or Andrew White. Howard, 6-5, has the size to defend bigger wings. Syracuse could look into letting Gillon and Howard share the floor more as the season progresses.

Syracuse will never be a team known for pushing the pace, but they’re averaging a little over 67 possessions per game this season, according to KenPom, which is their highest total in six seasons (2010-11). The Orange also have some really good perimeter shooters; it’s certainly easier to rack up assist numbers when the arc is dotted with players who can bang jumpers. All of that plays into allowing these two guys to average a combined 11 assists per game. Howard has started every game this season at point guard for the Orange, while Gillon plays in relief off the bench in a super-sub role.

Looking ahead: Wisconsin allows a stingy 91.2 points per 100 possessions — No. 9 in the nation. Syracuse will need a strong bounce back from their two point guards if they’re to pick up a significant road victory Tuesday evening in Madison.