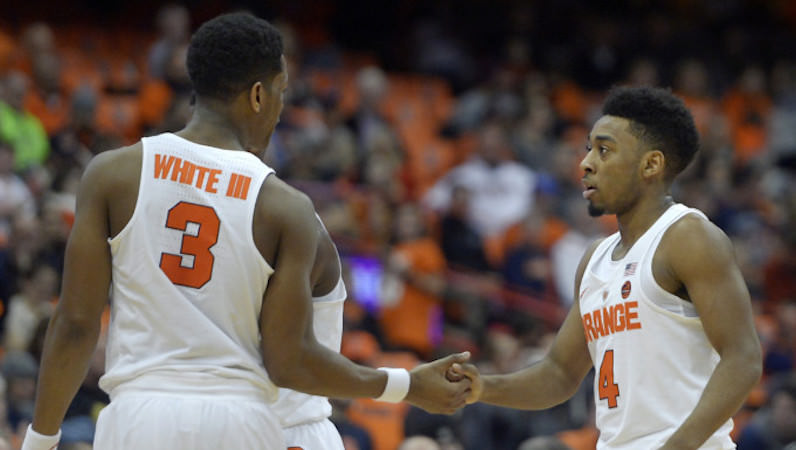 Following an 18-point loss on the road last month against Notre Dame, Syracuse slumped down to a lowly 11-9 record. The Orange were 3-4 in conference play and lacking any real wins of note. This season seemed rudderless, which was a disappointment following last year’s Final Four run.

My, how things have changed since then.

Syracuse is officially back from the dead; the Zombie Orange have ripped off five straight victories, including wins over Florida State and Virginia — both at Jim Boeheim’s fortress, the Carrier Dome.

Much of this turnaround should be credited to the team’s perimeter marksmanship. Andrew White has powered Cuse’s offense over this stretch — 25.5 points per game on 50 percent shooting — but everyone in the team’s limited rotation has discovered ways to contribute, including rookies Taurean Thompson and Tyus Battle. The Orange found a groove on offense by dotting the perimeter with shooters and chucking threes; Syracuse now ranks No. 3 nationally in points per possession from spot-up — 1.18, according to Synergy Sports.

Syracuse gets 35.2 percent of its points on three-pointers — good for 63rd in the nation. Among ACC teams, only Notre Dame nets a higher percentage of its points from beyond the arc: 36.3 percent. Four players in Syracuse’s rotation attempt more than three triples per game and shoot better than 39 percent from distance: White, Gillon, Battle and Lydon. Syracuse, as a team, shoots 39.4 percent on three-pointers, which ranks No. 28 nationally. Only Notre Dame (40 percent) and Virginia (39.8 percent) are more accurate from distance.

The power of the three-pointer is profound: Boeheim’s crew has won just one game this season — last month against Boston College — where it failed to shoot above 37 percent on three-pointers. And over this recent five-game winning streak, the Orange have connected on 50 of 118 (42.4 percent) three-pointers. In the overtime win against NC State, Syracuse made 32 field goals — 15 of them were threes.

What once looked like a lost season has been corrected; Syracuse now sits in fourth place in the mighty ACC standings. In conference games, the Orange are second in the league in offensive efficiency, according to KenPom.com — 115 points per 100 possessions, which ranks behind only North Carolina. Jerry Palm of CBS has Syracuse as an 11 seed — a world removed from where the team was located a mere four weeks ago.

Plenty of opportunities to ascend to a higher seed remain on the schedule, too. If Syracuse can continue its hot shooting, and bag additional key ACC wins, we will forget all about an ugly out-of-conference slate.

Good things come in threes. It is more than an expression; for Syracuse, it is a lifestyle.