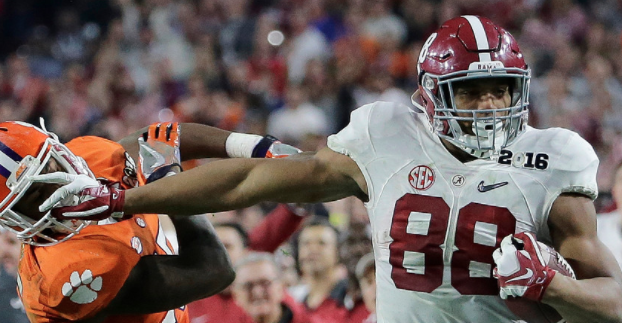 The matchup between Clemson and Alabama in the College Football Playoff national championship game a year ago was a close one, with the Crimson Tide winning 45-40. It’s reductive to say a 60-minute football game that involves 22 players on the field at all time can be boiled down to just a few plays. However, that mold of analysis fits last year’s title bout.

The kickoff Kenyan Drake took back 95 yards for a score will always stand out, but so too will several big plays made by Alabama’s most outstanding player on offense that evening in Glendale: tight end O.J. Howard.

Howard, who was named the game’s offensive MVP, roasted a fantastic Tigers defense for five catches (on five targets), 208 yards and two long touchdowns. On the five times Howard touched the ball, the 6-6 tight end found himself unaccounted for in the flat (when Clemson’s defensive front lost contain) or deep down field. Both of Howard’s touchdowns came in high-leverage situations — second-half scores that occurred when the game was tied.

Nearly 35 percent of Howard’s total yardage on the season came in the championship game. Those 208 yards are still a career best; his previous high was 81 yards in 2014 against Ole Miss.

The production has not slowed for Howard after he decided to return for his senior season in Tuscaloosa — this time with freshman Jalen Hurts at quarterback. He is third on Alabama’s roster with 41 receptions; according to Football Study Hall, Howard was targeted 52 times in the passing game this season, which translates to a super-efficient catch rate of 78.8 percent.

This is the second straight season that Howard has recorded a catch rate hovering around 80 percent. For his efforts, he was named second-team All-SEC by the coaches and first-team all-conference by Pro Football Focus. According to PFF, Howard averaged 1.54 yards per route run and has also emerged as a dominating part of their powerful run-block scheme.

Regardless of who coordinates Alabama’s offense on Monday night, it is no mystery what the overarching theme of its offense is: run the ball. Then run it some more. And then once that is done, run it again.

Alabama has a trio of brilliant runners in the backfield, too. Hurts ran for 12 touchdowns and 1,005 yards (if you add back in lost sack yardage); Damien Harris eclipsed the 1,000-yard mark (7.2 yards per carry); sophomore Bo Scarbrough, yet another Alabama power back in the mold of Trent Richardson, Eddie Lacy and Derrick Henry, is a freak of nature who ran for 271 yards on just 30 carries (better than nine yards per tote) and four touchdowns the last two games. For the season, Scarbrough is averaging an impressive 6.9 Highlight Yards per Opportunity — per Football Study Hall.

All of these guys will have to be accounted for, but Clemson needs to show greater attention to detail when it comes to bracketing and covering Howard.

Clemson is no doubt one of the best defenses in America, and Dabo Swinney’s crew is especially good against the pass. The Tigers rank inside the top 15 in a variety of categories, according to Football Study Hall: Passing S&P-plus (133.5), Success Rate on passing plays (33.2 percent) and isolated points per play (1.35).

However, even the best defenses can get punctured by good players, and that can be the difference in a big game. Clemson has allowed a few significant performances through the air this season. This chart features the leading receiver from all 14 of Clemson’s opponents in 2016.

Scanning the chart, it does not take long to notice that three of the bigger outings came against excellent tight ends: Hikutini, Samuels and Orndoff. Clemson’s lone loss of the season came against Orndoff and Pitt in November. The wins over Louisville and NC State were both one-possession games.

It remains to be seen what Steve Sarkisian — thrust into a bigger role than he could have previously envisioned — will cook up in his play-calling debut for the Tide. But while Clemson focuses on stopping that world-crushing run game of Alabama, the Tigers will have to make sure to bottle up one of the most dangerous receiving threats in all of college football. It could be the difference between a great season and immortality.