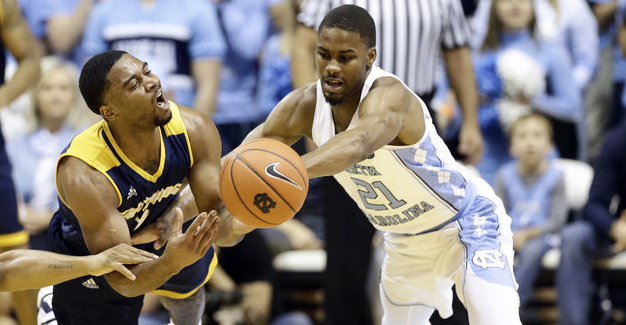 Freshman Seventh Woods (21) has 22 turnovers in 140 minutes of action this season. (AP Photo).

When Joel Berry went down with an ankle injury against Radford, the thought was his temporary replacement would be freshman Seventh Woods.

It made sense. In fact, in the win over the Highlanders, Woods posted career highs in minutes (22) and points (9).

That, however, proved not to be the case. In the following two games that Berry sat out — home wins over Davidson and Tennessee, both of which were close affairs — Woods played only 19 total minutes. Meanwhile, senior Nate Britt played 64 combined minutes against the Wildcats and Volunteers.

You don’t need to be a mathematician to see that Roy Williams preferred his veteran guard over the highly regarded rookie.

In limited action against Davidson and Tennessee, Woods shot the ball well in a small sample size (4-of-6). But he continued to have issues with what’s become his primary bugaboo: turning the ball over.

Woods played just eight minutes against Tennessee and was perfect from the field (3-of-3), but he turned the ball over three times, which resulted in an astronomical turnover rate of 50 percent. On the season now, Woods has a ghastly turnover rate on the wrong side of 35 percent. Woods averages 8.5 turnovers per 100 possessions, and according to Sports-Reference, his offensive rating has slipped below 0.87 points produced per possession.

This is likely why, even after the much-needed return of Berry, Woods has continued to slip in the rotation. The offense struggles when he’s on the floor. Roy Williams has 40 minutes per night to give to the point guard position. Berry is going to get the vast majority of that floor time, while the rest of the minutes are divided between Britt, Woods and the occasional Stilman White floor burn.

Of course, North Carolina will frequently use two of those point guards on the floor at the same time. Sharp-shooting Kenny Williams is the only true 2-guard on the roster.

It’s worth nothing, too, North Carolina played Kentucky in Berry’s first game back. That was an incredibly high-scoring and competitive game, which is why Berry played 34 minutes. It’s natural for a rotation to shrink in a game stuffed with high-leverage situations. Woods played just four minutes against the most exciting college basketball game of the season.

However, it’s not like Britt set the world on fire in Berry’s absence; the senior shot a miserable 18.2 percent from the floor (14.3 percent on three-pointers) in the Tennessee and Davidson games. Even as Kenny Williams starts to justifiably grab more and more playing time on the wing, there are places for Woods to carve out a niche off the bench in North Carolina’s deep rotation.

His athleticism and dunking capabilities are the stuff of legends at this point, but Woods isn’t just a YouTube highlight package; he can do some real things on the floor. He is capable of drawing fouls (5.2 per 40 minutes), and he’s an accurate shot from the charity stripe — 75 percent on the season. Per Adrian Atkinson at The Secondary Break (a tremendous source for North Carolina basketball analysis), Woods ranks second on North Carolina in potential assists created per 40 minutes — behind only Berry.