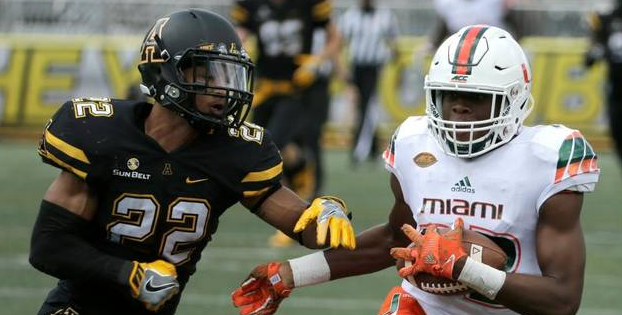 Miami entered the 2016 football season with three incoming four-star freshmen receivers on their roster. One of those players, Sam Bruce, has been dismissed from the program; another, Dionte Mullins, has yet to record a catch this season. The third and final player, however, has stood out for all of the right reasons: Ahmmon Richards is putting the finishing touches on a historical freshman campaign in Coral Gables.

Richards has four 100-yard receiving games in 2016 — three of those have come in the month of November. In wins over Pittsburgh, Virginia and NC State, Richards combined to haul in 20 receptions, which gives him 43 on the season, for 361 yards (18.1 yards per catch) and a touchdown. All of this production has helped him produce the most productive season for a freshman receiver in the history of Miami’s storied program.

In the win over the Wolfpack last Saturday, Richards broke Michael Irvin’s 31-year-old school record for receiving yards by a freshman; the rookie now has 849 yards on the season — fifth-most in the ACC — with two more games to go. He’s also emerged as one of the ACC’s top big play threats; he ranks third in the conference in yards per reception.

Quarterback Brad Kaaya targeted Richards 10 times against Pitt (eight receptions) and a team-high 12 times against NC State (nine receptions), according to Football Study Hall. The rookie wideout collected 144 yards through the air against the Panthers. This broke the Miami freshman record for receiving yards in a game — which Richards set earlier this season in a win in Boone, North Carolina over Appalachian State (142).

Richards has good ball skills, and can make plays down the field. He’s also capable of grinding out yardage following the catch. Richards is second to Stacy Coley on the team in both receptions and targets (68); however, amongst Hurricanes who have been targeted at least 35 times this season, Richards has the best catch rate: 63.2 percent, according to Football Study Hall. He’s also averaging an impressive 12.5 yards per target — which, as you can see in the chart above, is one of the best numbers in the entire ACC.

Miami hasn’t had a 1,000-yard receiving in several seasons; Allen Hurns was the last to do so back in 2013 when he snagged 62 passes for 1,162 yards. Richards would have to be productive in the team’s regular season finale against Duke, and in their bowl game. He’s averaging a little over 77 yards per game, and if he were to keep that pace up in the final two games, Richards would become just the third ACC freshman to eclipse the 1,000-yard mark. Clemson’s Sammy Watkins (2011) and Pitt’s Tyler Boyd (2013) are the only two receivers to ever achieve this. Richards has already put forth a top five freshman receiving season.