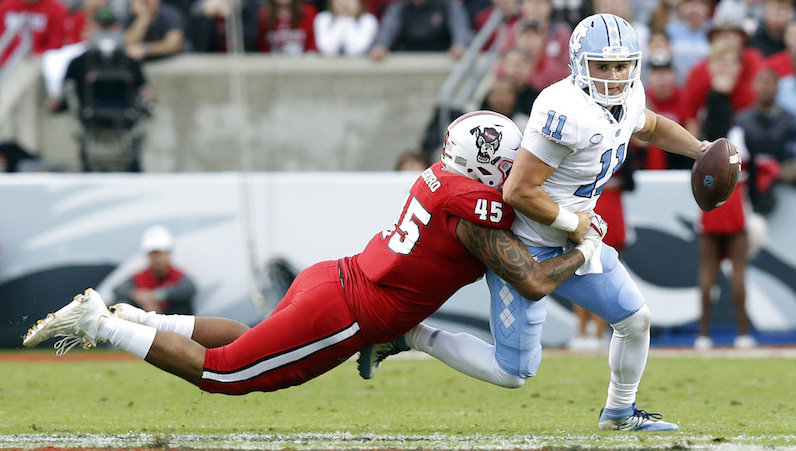 NC State junior defensive end Darian Roseboro has elected to return to school for his final year of eligibility in 2018. This is, of course, significant for the Wolfpack. En route to nine wins in 2017, NC State has featured one of the nation’s meanest defensive lines, led by Bradley Chubb.

Roseboro’s return means the cupboard won’t be entirely bare up front when NC State takes the field in 2018.

What’s headed out the door?

Simply put: a lot, in the form of several very good players. Chubb led the ACC in sacks (10) and tackles for loss (25). Street, Jones and Hill combined for 19 tackles for loss and 7.5 sacks, too.

Chubb projects as a top-10 pick in next spring’s NFL Draft; he likely won’t be the only Wolfpack defender selected. Kentavious Street, B.J. Hill and Justin Jones are all experienced difference-makers along the defensive line. They are also all seniors.

That’s a good deal of production and experience leaving Raleigh; it will be up to Roseboro to lead the charge.

Brings a lot to the table

The return of Darian Roseboro guarantees NC State a notable pass-rusher in the lineup for Dave Huxtable’s defense. Roseboro played in all 12 games in 2017, and has 34 career games under his belt.

With the help of Roseboro, NC State’s defensive line finished the regular season No. 4 in the FBS in terms of Havoc Rate; the front four either recorded a tackle for loss, forced a fumble, or defensed a pass on 7.2 percent of the plays it faced, per Football Study Hall.

Roseboro accounted for 2.5 sacks and seven tackles for loss this season. According to Football Study Hall, Roseboro collected eight runs stuffs — rushes stopped at or behind the line, which is tied for fourth most on the roster.

Roseboro’s most productive season, though, occurred in 2016. That year, the sophomore was one of 14 ACC players to record at least seven or more sacks.

Inside The Playbook: Omer Yurtseven and the drag screen of NC State