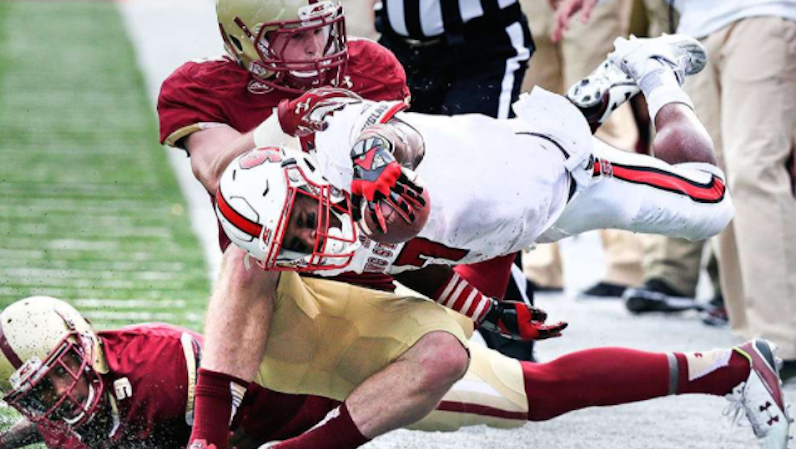 For his first four years at NC State, Dave Doeren knew he could lean on running back Matt Dayes. It’s a new era in Raleigh, though.

Dayes finished his career last winter as one of the greatest running backs in program history. Now with the Cleveland Browns, Dayes ranks fourth all-time in NC State history in career yards (2,856), fifth in carries (549) and third in touchdowns (34).

It won’t be easy to locate a surefire replacement on the current roster, but the Wolfpack bring back eight starters on offense, including four on the offensive line.

NC State also has several players capable of making up for Dayes’ lost production. Here’s a statistical look at some of those top options.

Gallaspy isn’t the receiving threat that Dayes was, but he’s a very physical runner; the junior also possess some big-play potential, too.

The 5-foot-11 back was third on State’s roster in 2016 with 49 carries. Gallaspy averaged a solid 4.8 yards per carry; his season long run was a 37-yarder against East Carolina that he housed.

We can dig a little deeper, though, and find some even more promise. According to the wonderful Football Study Hall, Gallaspy recorded 4.5 Highlight Yards per Opportunity in 2016.

Highlight Yards per Opportunity measure how many yards a ball-carrier gains after the line has properly blocked.

Gallaspy’s average of 4.5 is actually higher than that of Dayes, who averaged four Highlight Yards per Opportunity as a senior. He posted five carries of 10-plus yards, per cfbstats.com, and 10 of his 49 carries went for first downs.

The High Point, N.C. native also so his workload tick up at the end of the season. In wins over North Carolina and Vanderbilt, Gallaspy ran for a combined 88 yards on 21 carries. Gallaspy has five career games of 10-plus carries.

The bruising back looks prepped for a larger serving of carries in 2017.

Under Dave Doeren, NC State has played a type of positionless offense that focused on getting playmakers the ball in space — regardless of where they lined up. Jaylen Samuels has been the most obvious beneficiary of this; however, Nyheim Hines makes his presence felt here, too.

As a sophomore, Nyheim Hines was featured far more as a kick returner and receiver, though. Hines, who recorded 48 carries as a freshman, ran the rock just 13 times in 2016. He did, however, record 60 targets and 43 receptions (71.7 percent catch rate, which is great), per Football Study Hall — both career bests.

In the home loss to FSU, Hines went bonkers: 11 catches on 14 targets for 124 yards. Hines has also returned two kick for touchdowns in his career at NC State.

But can he help more in the run game?

Absolutely. Nyheim Hines is a burner — a literal track star — with all types of shifty moves; he averaged four Highlight Yards per Opportunity in 2016, and 4.9 as a freshman (on more carries). For his career, 11 of his 61 carries (18 percent) have gone for at least 10 yards.

We’ve discussed it ad nauseam in this space: Samuels is an incredible pass-catcher. It’s fitting that he’s accounted for 32 touchdowns in his three-year career, so far, and 15 of those have come through the air, while 16 have come on the ground.

Back in 2015, Samuels tied for ninth in the ACC with nine rushing touchdowns. At times, he appears unstoppable on those patented jet sweeps of his — getting to the edge just before a sprinting linebacker can pull him down.

In 2016, though, Samuels was especially efficient running the ball: 33 carries, 189 yards (5.7 yards per carry), five Highlight Yards per Opportunity and six touchdowns. He was the only player in the ACC to have more than five rushing touchdowns on fewer than 50 carries.

Over the last two seasons, an ACC player has scored at least one rushing and one receiving touchdown in the same game 24 times. Samuels accounts for three of those performances.

For his career, Samuels has six carries of 20-plus yards, and 30 of his 104 carries have gone for first downs.

Nichols is a player that’s been on the verge of an increased role for years. It’s now or never, though.

He’s run for 365 yards on 73 carries over the first three seasons of his career in Raleigh. The 5-foot-9 back will get one more trip around the ACC sun this season.

Nichols carried the ball just 19 times in 2016, but two seasons back, he recorded 43 carries for 201 yards. That season he also averaged 4.2 Highlight Yards per Opportunity.