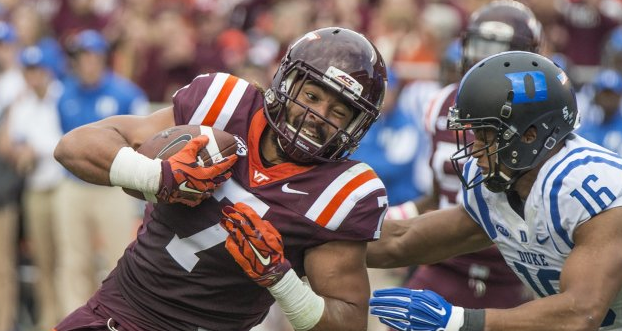 It doesn’t matter if it’s college football or the NFL; if you flip your television and watch a tight end catch a pass, this next phrase is certain to exit the mouth of one of the commentators: “He’s a matchup problem for the defense because he’s too big for the defensive backs and too fast for the linebackers to cover.”

This overused cliche not withstanding, the tight end position is incredibly valuable to a good offense. It’s a versatile position that allows players to impact the game in a variety of facets.

Teams use their tight ends differently, too. North Carolina has one of the best passing offenses in the nation, but its tight end, Carl Tucker, has just six receptions this season. The Tar Heels use their running backs to augment the production of their wide receivers. Georgia Tech doesn’t even have a tight end on its roster; it’s simply not a position in Paul Johnson’s spread-option offense.

That said, the ACC is loaded at the position, which is why it’s worth looking into who is the best of the bunch.

Statistically, there’s a clear-cut top five. Apologies to Scott Orndoff: He just misses the cut. Everyone on this list has a minimum of 17 receptions, but the upper echelon is made up of players with catch rates of at least 60 percent and 20-plus receptions. Cam Serigne is a productive player, too, but 2016 has been a tough season for the redshirt junior.

NC State’s Jaylen Samuels was a first-team All-ACC selection in 2015 and leads the league’s tight ends in receptions with 34. The Wolfpack junior is also tied for second with two other players in touchdown receptions (4). Of the players who have over 40 targets, though, he has the fewest yards — by a wide margin.

This is a function of Samuels’ role in the Wolfpack’s offense. He lines up all over the field and is used on a lot of short, higher percentage routes. He has a fantastic catch rate of nearly 74 percent, and his ability to run the ball is a feature unique to him among the ACC’s tight ends. The Charlotte, N.C., product averages over five yards per carry and has three rushing touchdowns on the season.

Cole Hikutini is a reliable weapon in Louisville’s fast-break offense. He’s gotten better as the season has progressed, and he’s already outpaced his numbers from 2015. He’s second in receptions (33) and leads the conference in receiving yards for tight ends.

Lamar Jackson has trust in his tight end: Hikutini has caught 72 percent of the balls thrown in his direction, which is tops on Louisville’s team for receivers who have been targeted at least 20 times. In three of his last four games, Hikutini has caught at least six passes for 84 or more yards. Not many people knew much about this guy before the season started, but he’s built an impressive reputation.

Virginia Tech’s offensive revolution under Justin Fuente and Jerod Evans has been boosted by its improved receiving corps, which features tight end Bucky Hodges — an All-ACC third-teamer a season ago. Hodges leads this group of tight ends in touchdown receptions and targets (48), according to Football Study Hall. He ranks third in receptions and second in yardage.

Miami’s David Njoku is an intriguing NFL prospect who shares touches as part of a two-headed tight end monster in Coral Gables. His 16.5 yards-per-catch average is third-best in this group; he’s caught 60 percent of the ball thrown his way, which is on the lower end. Njoku also has to split targets with Christopher Herndon IV, who has 19 receptions on the season — tied for sixth-most in this group.

A list of the best tight ends in college football  — regardless of conference affiliation — wouldn’t be complete without Clemson’s Jordan Leggett. Leggett was selected to the preseason All-ACC team back in July — ahead of Samuels and Hodges. He trails those two in terms of catches and targets, but he has four touchdown receptions and is tops among tight ends in yards per catch (17.7).

Leggett had been having a somewhat pedestrian season, but that was until he blew the doors off and went berserk against Florida State: eight targets, five receptions, 122 yards and the game-winning touchdown, which he capped off with an exquisite diving leap.

All nine of these tight ends are valuable to their respective teams. It’s tough to choose who has been the ACC’s best tight end thus far; there isn’t one player running away with it in terms of statistics. However, if I had a vote, I’d go with Bucky Hodges. That’s subject to change, though, if Dave Doeren wises up and finds more ways to get Jaylen Samuels the ball.

It’s election season, so make sure to cast your own vote below: Which player is the best tight end in the ACC?