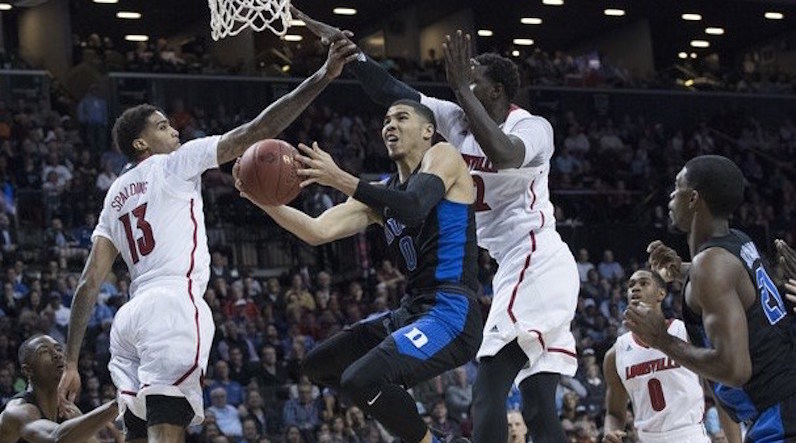 Ray Spalding (13) will be counted on to hold down Louisville's power forward minutes in 2017-18. (AP Photo)

Ray Spalding will be a player to watch next season in the ACC. Why, you ask? Well, this week, Louisville forward Jaylen Johnson decided to hire an agent and keep his name in the NBA Draft.

The Cardinals will also be without Mangok Mathiang, who finally used up all of his eligibility. This means Louisville will need Spalding, who started eight games a season ago, to absorb a high volume of minutes at power forward and expand his intriguing offensive game.

Spalding does not do much in terms of spacing the floor; according to Synergy Sports, he made just three of 15 jump shots in 2016-17.

The 6-10 forward has yet to flash much of a back-to-the-basket game, either. Spalding shot a decent 42.1 percent on said possessions, which is good, but what is less good is a turnover rate of 32.4 percent. That ranks dead-last among 36 ACC players who recorded at least 30 post-ups.

Spalding is, however, rather effective at the hoop — specifically when he catches the ball facing the basket. Per Synergy, he shot 64.4 percent and scored 1.3 points per possession (No. 14 in the ACC) on non-post-ups around the basket.

Spalding was not too far behind, though. As a sophomore, he grabbed 11 percent of the available offensive rebounds while on the floor. He shot 59.5 percent on putback attempts following an offensive rebound, too.

And how about on defense?

For the second straight season, Spalding posted a block rate of five percent or better and a steal rate above two percent, according to KenPom.com. That is no small feat, by the way.

It shows in the results; according to Sports Reference, Spalding posted the second-best defensive rating on the roster: 92.5 points per 100 possessions. Per Synergy, opponents shot just 38.9 percent on non-post-up attempts around the basket defended by Spalding. Anas Mahmoud, who continues to get better and better, was tops in this category and posted a defensive rating of 89.6 points per 100 possessions.

That could potentially bode well for Rick Pitino. With Mathiang gone, Mahmoud will likely start at the pivot for Louisville. The Cardinals ranked No. 8 nationally in defensive efficiency this past season, so do not expect that to change too much.

It will not be all up to Spalding and Mahmoud to hold down the interior. Reserve center Matz Stockman, who played a total of 238 minute in his first three seasons at Louisville, will transfer to Minnesota. However, three long-limbed reinforcements are on the way.

Incoming freshmen Lance Thomas and Malik Williams should offer a boost, too. Williams is a top-30 recruit and rated as a 5-star prospect.

Also this week — UConn big man Steven Enoch announced that he will transfer to Louisville. Enoch will not be able to help out in 2017-18, though, when he redshirts.

The biggest question mark now is whether or not Donovan Mitchell and Deng Adel return to school or follow Johnson’s path. Adel seems likely to be back in red and black next season, but Mitchell is projected as a first-round selection.