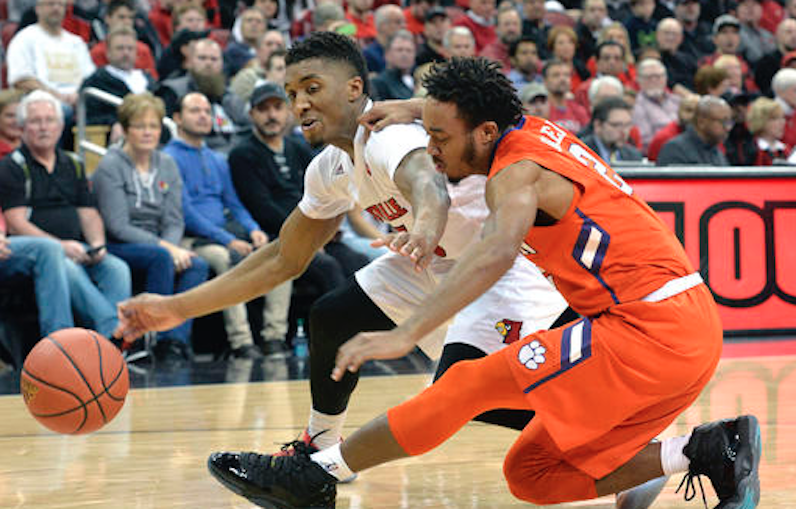 Donovan Mitchell (left) was a first-team All-ACC selection this past season. (AP Photo)

Louisville’s Donovan Mitchell entered the 2017 NBA Draft pool without hiring an agent, leaving open the possibility he might return to college. With his stock climbing, though, Mitchell is in an enviable position as the draft approaches.

There’s no question that Mitchell is in the first-round conversation. Getting picked in the top 30, of course, would mean a guaranteed contract.

A well-rounded guard who can shoot, defend and rebound, Mitchell averaged 15.6 points and 4.9 boards per game in 2016-17. He earned first-team All-ACC honors for his efforts.

READ MORE: Louisville’s up-and-comer you might not know about

NBA scouts like Mitchell’s outside shooting; he ranked in the top 10 in the ACC in three-point field goals (80) this past season. They also like his defensive awareness. Mitchell led the ACC in steals (70) as a sophomore on his way to making the All-ACC Defensive Team.

Mitchell, who’s 6-3, has adequate length for an NBA shooting guard. With his willingness to get his hands dirty on the defensive end of the floor and on the glass, he could certainly carve out a role at the next level.

As a projected first-rounder, Mitchell has a lot to think about. Could he get selected even higher in 2018? Perhaps even in the lottery? Those are the questions Mitchell faces as he works toward a decision on his future.

In Mitchell’s case, there’s no guarantee that returning to Louisville would be in his best interest. Injuries are always a possibility. He could return to UofL and be one of the top returning players in the entire ACC. But there’s no assurance his NBA stock will rise any higher than it is right now.

Mitchell will take all of that into consideration in the coming weeks.