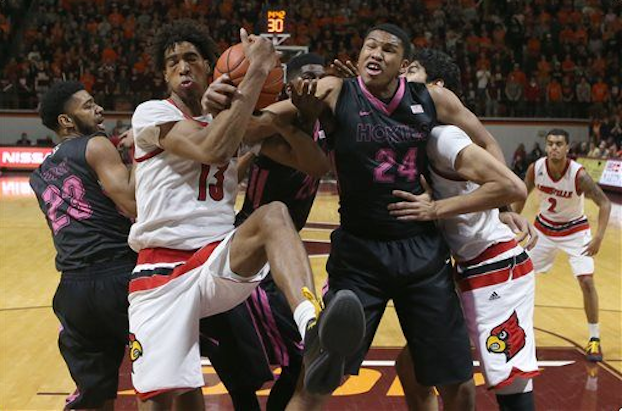 There are a lot of things that go into making a great defender. Intelligence, instincts, versatility, tenacity, anticipatory skills and a short memory are a few that come to mind quickly. There are, of course, different types of defenders, too: shot blockers, pesky point guard-stoppers and long-armed wings. Some truly special players are able to combine all of these traits, and when that’s the case, they can disrupt an offense.  These are the kind of defenders that cause coaches to lose sleep, designing game plans to free up their best scorers.

If you watched any of Team USA basketball during the Olympics, you saw a handful of impactful defenders push the Americans to a third-straight gold medal: DeAndre Jordan, Kevin Durant, Klay Thompson, Kyle Lowry, Draymond Green — and above everyone else, Paul George. George — the Indiana Pacers All-NBA forward — is the perfect defender: impossibly rangy and super smart. He can guard every position on the floor, and he’s so clever at fighting over or through picks. He makes himself nearly impossible to screen, which can throw off an entire offense.

So much stuff goes into being a good defender; it’s not just about being athletics and aggressive, although those two traits obviously help. Accordingly, a variety of metrics can be used to evaluate what makes a good defender. There is no one perfect, catch-all stat, but a team’s defensive rating (points allowed per 100 possession) when a certain player is on or off the court is a good place to start.

Clemson’s Landry Nnoko, who finished his career with the Tigers last season, led the ACC in block percentage in 2015-16; he rejected an absurd 11.3 percent of opponents two-point attempts, which ranked 11th in the nation, according to stat whiz Ken Pomeroy. Meanwhile, Devon Bookert led the ACC in steal rate (3.53 percent) last season as a senior, too.

What I wanted to find, though, were the ACC defenders who were able to curtail opponent possessions in more ways than one — which guys were gifted rim protectors and thieves. To do so, I compiled a list of ACC players who satisfied these requirements:

In total, there were just seven ACC players who hit this combination of benchmarks in 2015-16, including two from Syracuse — who finished 16th in defensive efficiency, per Pomeroy. It’s worth pointing out that none of these guys landed on the ACC’s All-Defensive team. Now, without further adieu, take a look at this exclusive list of defensive game-changers: