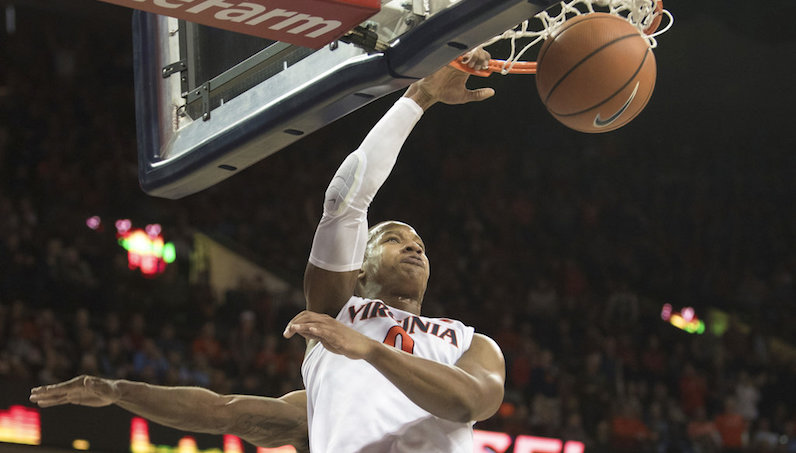 For the second time in three years, a Virginia Cavalier was selected in the second round of the NBA Draft. Back in 2016, that of course was Malcolm Brogdon, who went on to win Rookie of the Year. It’s safe to say: the Oklahoma City Thunder would be happy (and surprised) to see history repeat itself.

That said, this was a good value pick for OKC in the draft: Devon Hall adds two-way production to this roster. Hall fits the culture OKC, and gives the franchise another 3-and-D option on the wing.

The Thunder, which won 48 games and made the playoffs this season, have to figure out free agency with All-Star Paul George. George enters unrestricted free agency as one of the top players on the market, in line for a max contract. Assuming George doesn’t jet off and join LeBron James and returns to OKC, which is totally in the cards, then the Thunder are built to contend now.

This is why Hall makes so much sense: after four years in the ACC (128 games), the UVA wing is ready to help now.

When OKC had George and fellow defensive stud Andre Roberson on the floor together last season, the Thunder allowed just 94 points per 100 possessions. That’s an insanely good number. Hall can’t possibly measure up to George and Roberson — two extraterrestrials that engulfs opponents with their wingspans — in terms of length and athleticism.

Last month at the combine, Hall measured in with a wingspan under 6-foot-8 and a max vertical of just 31 inches. Neither of those numbers are great, but we know Hall’s a rugged defender, guarded 1-4s in the ACC this season and logged over 3,000 career minutes for a program that routinely produces top-five defenses.

These individual numbers can be a bit wonky, but Hall ranked in the 67th percentile nationally in man-to-man defense last season, according to Synergy Sports: 0.81 points per possession (42.4 eFG%). Hall also averaged nearly two steals per 100 possessions, too.

Devon Hall won’t be counted on to play leverage minutes, most likely; that’s totally fine, though. He can plug-and-chug and provide depth on the wing — which is something OKC covets.

When Roberson went down with an injury nearly halfway through the 2017-18 season, OKC was put into a bind. The team tried a bunch of different dudes out on the wing: Alex Abrines, Jerami Grant, Terrance Ferguson and Corey Brewer.

Grant, the Syracuse product, is a free agent this summer and may be too pricey to resign; Abrines is an up-and-down player that has issues defensively. Ferguson is a promising young player on a cheap rookie deal — entering his second year in the NBA. Brewer was a desperation signing, and may not be brought back.

Basically, there should be minutes available on the wing, regardless of what George decides. OKC also didn’t have a first round pick; Hall and the other second rounders may be needed to fill out the roster. Cost-effective solutions are pertinent, too; it will get very expensive to bring back George on the max, especially if Carmelo Anthony doesn’t opt out of his early termination option for 2018-19 ($27.9 million).

The Fit for Devon Hall

On offense, Oklahoma City is about as simple as it comes. They run some hawk action and loopy back/down screen actions to get George looks at to hoop. But for the most part, though, this team relies on the pick-and-roll from Russell Westbrook and Pitt product Steven Adams. It’s for good reason, too.

Westbrook is a maniac, hellbent on getting to the rim; while not overly efficient, Russ finished sixth in the NBA in scoring out of the pick-and-roll. Adams finished second in the NBA in points per possession as a roll man: 1.22 (65.2 FG%).

RW is an absolute battering ram, but for this to flow, though, Adams and Russ need space in the middle, which makes wing shooting critical. OKC finished ninth in the NBA in catch-and-shoot three-point attempts: 23.1 (37 3P%).

Well, Hall was excellent off the catch as a senior. According to Synergy, Hall scored 1.38 points per possession (68.9 eFG%) on catch-and-shoots — No. 29 nationally (minimum 100 possessions).

As we’ve discussed in the space before, Hall was the ACC’s top off-screen shooter in 2017-18, too: 1.35 points per possession (69.6 eFG%), per Synergy. This is way more of a stretch, but perhaps to pump up some bench scoring, OKC could use some of its Paul George floppy sets for Hall.

Behind the numbers: Is there another gear for Kyle Guy and Virginia on offense?