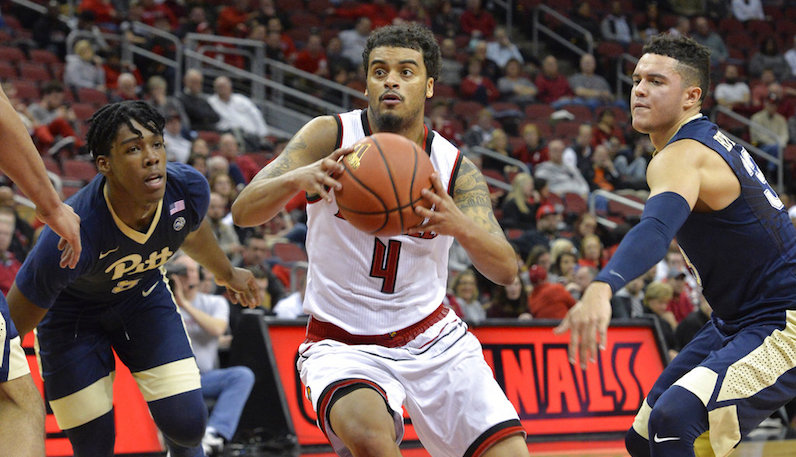 David Padgett has done an excellent job with Louisville basketball this season. Padgett was thrust into a tough situation due to Louisville’s involvement in the FBI’s corruption investigation, which cost Rick Pitino his job.

He’s likely the frontrunner for ACC Coach of the Year, although Tony Bennett and his smile aren’t too far behind.

As nice of a job as Padgett has done, he’s also been fortunate to have some really good and really experienced players to work with — including senior point guard Quentin Snider, who is in the midst of a career season.

The end to the 2016-17 season was a clunky finish for Quentin Snider. In Louisville’s three postseason games, Snider shot 30.6 percent from the field and 20 percent on three-point attempts; in the team’s lone NCAA Tournament game, a loss to red-hot Michigan, Snider threw up a goose egg: 0-of-9 shooting.

If anything, that final stretch has become motivation for Snider, who as a senior is playing more minute, using fewer possessions and hitting newfound efficiency.

Snider ranks 16th in the ACC in minutes per game (33.1); however, his usage rate his dropped, slightly, to 19.2 percent, according to KenPom — closer to where he was his sophomore season.

No longer playing next to the dynamic Donovan Mitchell, Snider is shooting fewer threes this season, and getting to the line more — which is a good thing.

Don’t get more wrong — Snider is still unafraid to launch from deep; however, his attempt rate has declined. Last season, 50 percent of Snider’s field goal attempts came from beyond the arc. That’s dropped to 46 percent this season. He averaged 10 three-point attempts per 100 possessions in 2016-17; that’s down to 7.5 this season.

Instead, Snider is getting to the line more frequently: a free throw attempt rate of 34.7 percent (up from 27.2 percent). That’s a good thing, because Snider is shooting 88.6 percent from the line — No. 5 in the ACC.

Louisville likes to play with tempo, and Snider has gotten to the line a bunch in transition. According to Synergy Sports, Snider has drawn a foul on 14 percent of his transition possessions.

It’s no secret: Quentin Snider is one of the better pick-and-roll scoring guards in the nation. In 2016-17, Snider used 111 pick-and-roll possessions — shoot, draw a shooting foul or turnover. He was one of only 10 ACC players to eclipse the 100-possession mark — along with Donovan Mitchell.

On those attempts, Snider scored 0.89 points per possession, shot 41.2 percent and turned it over 11.7 percent of the time.

As a junior, 28.8 percent of Snider’s possessions were as a pick-and-roll ball handler. Without Mitchell, that number has predictably climbed to 31.4 percent this season (85 total). His production has followed, too: 0.91 points per possession — No. 9 in the ACC (minimum of 50 possessions) — on nearly 47 percent shooting, per Synergy.

The turnover rate, however, has jumped too: 18.8 percent. If Snider could trim this, his efficiency would climb higher — only seven ACC players have shot a better clip than Snider out of the pick-and-roll.

A summit at the summit

Another key for Quentin Snider this season: more productivity at the basket. According to Synergy, only 19 percent of Snider possessions came around the basket last season. He shot just 40.4 percent and scored only 0.83 points per possession.

Snider isn’t exactly Kyrie Irving, but he’s improved in this area, too. This season, nearly 28 percent of his possessions are at the basket; on those attempts, Snider his shooting 45.5 percent and scoring 0.98 points per possession, per Synergy. He’s drawn a foul on 6.8 percent of those possessions — up from 2.1 percent in 2016-17.

The Cardinals and Snider have their biggest challenge of the season on Wednesday, though. They travel to Charlottesville for a date with No. 2 Virginia. The clash of two of the ACC’s best will offer a steep contrast in terms of pace, which is something that the Cavs normally dictate.

UVA is also the No. 1 defense in the nation, and they’ve put the clamps on a variety of top-flight perimeter options this season. If Snider can somehow maintain his strong senior season, though, perhaps Louisville can spring the upset.

What to expect with Jawon Pass taking the reins at Louisville