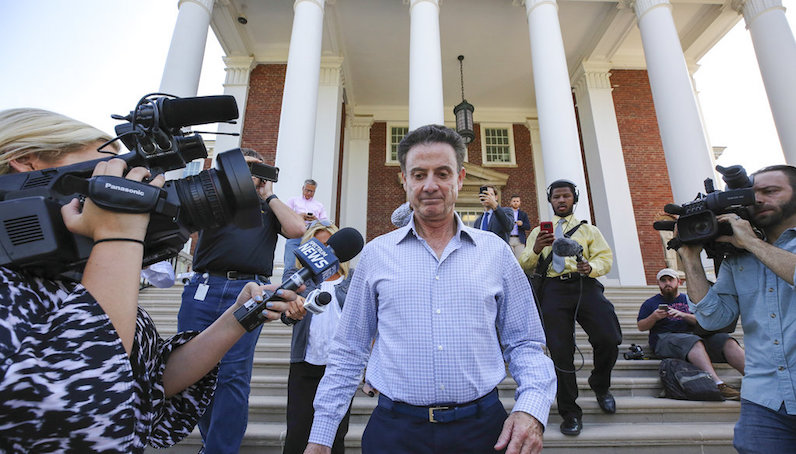 FILE - In this Wednesday, Sept. 27, 2017, file photo, Louisville men's basketball coach Rick Pitino leaves Grawemeyer Hall after having a meeting with the university's interim president Greg Postel, in Louisville. Ky. The spate of arrests, the details of under-the-table bribes to teenagers and the expected downfall of one of the sport’s best-known coaches has triggered uncomfortable soul searching among universities that run the nation’s most prominent college basketball programs.(Michael Clevenger/The Courier-Journal via AP, File)

There were no surprises Monday afternoon — only closure, and perhaps the start of a lengthy rebuild. After several closed-door meetings, Jeff Greer of the Courier-Journal, among other, reported that the university has decided to terminate Rick Pitino’s employment.

ULAA has voted to terminate Rick Pitino's employment "for just cause."

Louisville’s athletic board voted unanimously to terminate Pitino as the head basketball coach at the program. Pitino has been on administrative leave since the end of last month, when the FBI first publicly reported its corruption investigation into college basketball.

Here’s a look at the school’s athletic association resolution.

The resolution from the University of Louisville Athletic Association: pic.twitter.com/fKYEBi2D1o

David Padgett, the program’s new coach who played for Rick Pitino at Louisville, has hired veteran coach Trent Johnson to be an assistant. It was announced this morning, too, that Padgett will be paid a base salary of $800,000. Padgett could earn up to $1 million over the next 12 months as he tries to push forward a program that currently has zero basketball commitments.

To move forward, Louisville should look to its past

Jae’Lyn Withers: New Styles and Refusing To Wither Away