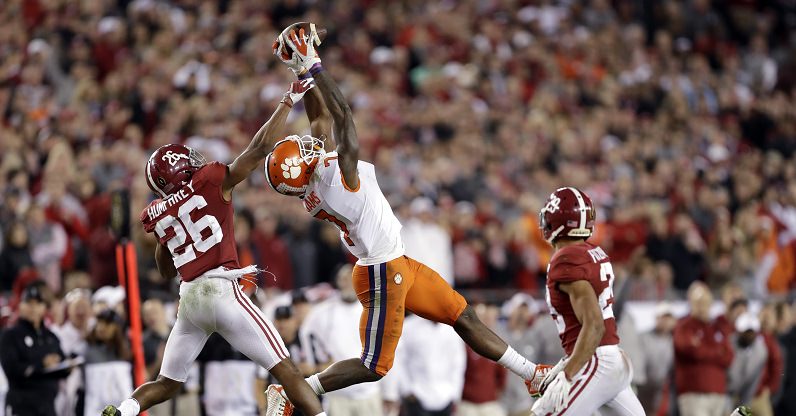 Mike Williams hauled in eight receptions for 94 yards and a touchdowns against Alabama. (AP Photo).

Last August, ACCSports.com predicted Mike Williams would have a big junior season for Clemson. So, too, did everyone else with a half of a pulse.

Even a broken clock is right twice a day: Williams was a juggernaut for Clemson all season en route to the Tigers’ first national championship since 1981. In the rematch win over Alabama, the top wide receiver prospect in college football was once again dominant, taking flight for eight receptions on 11 targets for 94 yards and a fourth-quarter touchdown.

That touchdown wasn’t the only high-leverage play made by Williams, though. The 6-3 wideout hauled in two spectacular balls at two other points in the fourth quarter. With a little over five minutes remaining in the season and Clemson trailing by three, Williams skyed over a host of Alabama defensive backs for a leaping 26-yard catch.

The Tigers would punctuate that drive with a one-yard touchdown plunge from running back Wayne Gallman, which made the score 28-24 in favor of Clemson.

On the game’s final possession, with Watson and the Tigers driving for immortality, Williams caught another pass that looked like he descended from the rafters to collect.

I mean, are we sure this dude is from this planet? My word, is that ever impressive.

We all know what happened next — less than two minutes later, Hunter Renfrow made the game-winning touchdown grab. It’s no surprise that when Williams was injured earlier in the game, Clemson struggled on offense, and when he returned, the Tigers hit another adrenaline-soaked gear. Renfrow caught the pass that will never be forgotten in the state of South Carolina, but Clemson would not have even been in that position if not for the brilliance of Williams.

For the season, Williams finished with 98 receptions on 140 targets — a catch rate of 70 percent — for 1,361 yards and 11 touchdowns. All of those were career highs. That also equates to an insane average of 9.7 yards per target — incredibly good for a receiver with such a high volume of looks.

This game had so many amazing elements to it, but the success of Williams — a player Clemson didn’t have during last season’s title bout — was so profound and obvious. It played a critical role in deciding who collected the sport’s grand prize.

Williams is rated as the No. 1 wide receiver prospect in the 2017 NFL Draft — shocker, right? Can Mike Williams dwarf his 2014 numbers this fall, we asked back in August. Yes, more than you could ever believe.

Now, get ready to see him on Sundays.