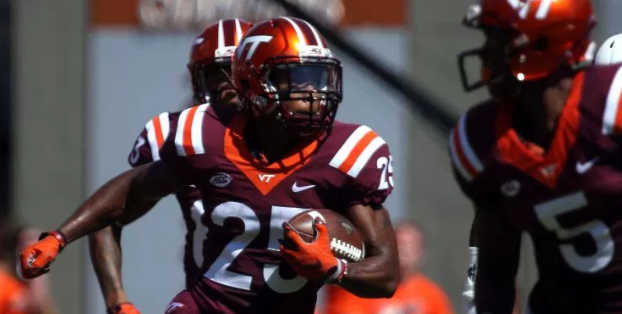 Virginia Tech’s Greg Stroman (25) returns a kick for a touchdown in the first quarter of an NCAA college football game against East Carolina. (AP Photo).

Justin Fuente’s debut season in Blacksburg has been a smashing success for Virginia Tech.

The Hokies are 6-2, ranked inside the Top 25 and control their destiny in the Coastal Division. A trip to Orlando could very easily be on their horizon.

The defense has been great — against both the pass and run. Jerod Evans has exceeded even the most extravagant of preseason expectations. The team is absolutely rolling, and a big factor for its success has been something that every facet of the roster, including special teams, has played a role in: field position.

It’s a chore to listen to football announcers bemoan the importance of winning the field-position battle, but there’s empirical evidence that supports the value of gaining an edge in this department. According to a 2014 post on Football Study Hall, teams that win the field-position battle (average starting field position) win 72 percent of the time.

There’s an obvious confounding variable here: The superior team is more likely to have better field position than the inferior opponent.

Superior offenses can move the ball on defenses that struggle, and vice versa. That said, there’s value in tracking this. It reflects how effective a team is at just about everything: moving the ball on offense, scoring, defending the pass — you name it.

Under Frank Beamer, Virginia Tech became known for its ability to shift the outcome of a game based off its prolificness on special teams — blocking kicks, big plays in the return game, etc. That has continued under Fuente, too.

Joey Slye has proven to be a reliable field-goal kicker; he’s connected on 80 percent of his kicks thus far. However, he’s also been a major weapon on kickoffs.

Slye and his coverage team have a success rate on kickoffs of 100 percent, according to Football Study Hall, which is obviously the best number in the nation. Slye has recorded 58 kickoffs in 2016 — 46 of those have resulted in a touchback, which means 79.3 percent of the time Tech’s opponents don’t have have a chance to start from beyond their own 25-yard line — a below-average starting point.

This is an improvement for Slye, who was already pretty good in 2015. Last season, the Hokies posted a kickoff success rate of 84.2 percent (No. 19 in the nation); Slye recorded a touchback rate of 69.4 percent.

Slye hasn’t been the only one making a difference in the kicking game, though. Mitchell Ludwig — the team’s punter — has been solid, too.

Ludwig has punted the ball 38 times in 2016, and 16 of those (42.1 percent) have been fair caught. Nearly half of his punts (17) have pinned an opponent inside the 20, per Football Study Hall. This is a testament not only to the leg of Ludwig, but also Virginia Tech’s offense. Even if the Hokies are forced to punt, they move the ball and have Ludwig positioned to snap a kick deep into enemy territory. Once they have their opponent backed up, their blitz-heavy defense can go to work, and their secondary (No. 8 in the nation in havoc rate) can work on creating nightmares for quarterbacks.

Virginia Tech can do more than just kick the ball around on special teams.

The Hokies already have one punt block on the season, and occasionally they can do something electric. Just ask Greg Stroman, who did something pretty nifty against East Carolina while wearing Beamer’s old No. 25:

The Hokies will be favored in every remaining regular-season game. A special (see what I did there?) season could develop here in the next few weeks. As long as they keep winning the field-position battle, the odds will be stacked in their favor.