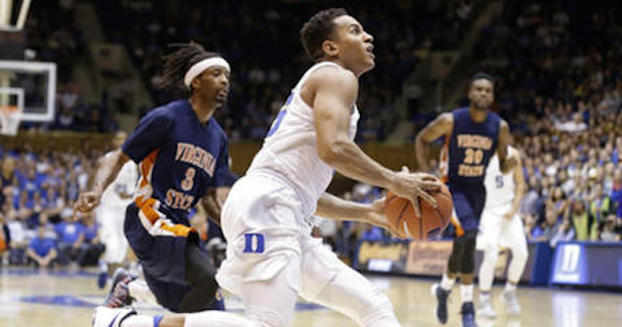 Frank Jackson is averaging 15.6 points per game to start his career at Duke. (AP Photo).

Duke has played five game so far this season — with the sixth coming Wednesday evening in Durham against William & Mary — and only one member of their star-studded freshman class has been healthy and contributing: guard Frank Jackson.

Jackson, who is coming off his first career start in an impressive win against Rhode Island, is second on Duke in scoring (15.6 points); only one other ACC freshman — NC State’s Dennis Smith Jr. (17.8) — has outpaced him in the points column. He’s played at least 30 minutes in each of their last three games, and also leads the team in usage rate — 24.4 percent, according to Sports-Reference.com. This means nearly a quarter of Duke’s possessions end with him shooting, getting fouled or turning it over. This is rather impressive when you factor in that he plays alongside Grayson Allen — a high-volume scorer who ignites a lot of Duke’s offense with his dribble drives. Allen finished ninth in the ACC last season in usage rate.

The freshman has scored in double figures in every game this season, including a career high 21 points against Grand Canyon University, which has been highlighted by his superb shooting. Jackson is chucking 4.6 threes per game (41.8 percent of his shots have come from beyond the arc), and connecting on 39.1 percent of those launches from distance.

It’s nice to be a good shooter, but what makes Jackson special is his ability to drive and draw fouls. He can blow by defenders and really jump at the rim. Jackson has managed to get to the line with frequency; according to Ken Pomeroy, he’s drawing five fouls per 40 minutes. On a related note, Jackson’s attempting 4.2 free throws per game (third on the team), where he’s shooting 81 percent from.

It’s also encouraging to see that he isn’t afraid of a big moment, too. Duke lost to Kansas last week at Madison Square Garden; however, with an arsenal of NBA scouts on hand, Jackson delivered a terrific performance: 11 points on just five shots, including this bomb from the corner that cut Duke’s deficit in half with three minutes remaining in the game.

A rare four-point play with the game on the line? This is a move that would make Jamal Crawford beam with pride and joy.

It will be worth monitoring how Jackson develops as a playmaker and a creator for others. Right now, he’s handing out just 3.3 assists per 100 possessions, and has an assist rate of only 11.7 percent. In the loss to Kansas, Jackson didn’t record a single assist. In fact, he has just nine on the season, and four of those came in the opener against Marist.

At full strength, Duke has an incredibly deep roster on their hands, but even with their complete compliment of players, the Blue Devils are somewhat bereft of creators. Allen and Jackson are splitting time as Duke’s nominal point guard, even though they’re both really wings. And with Allen nursing some lingering injuries, it’d be nice if Mike Krzyzewski could source some of the distributing to his freshman guard who possesses a lighting-quick first step.